Rare whale off BC coast 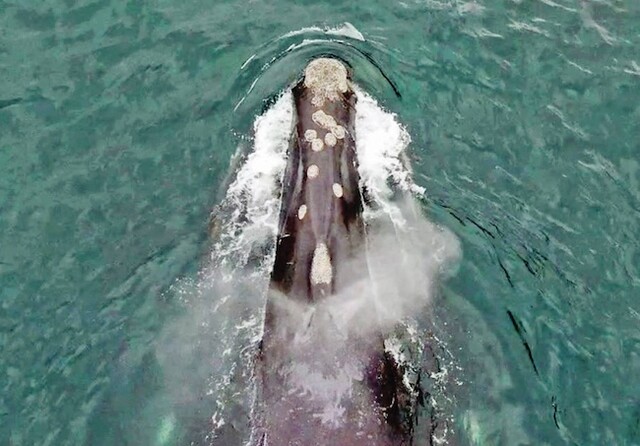 Jared Towers and James Pilkington had been out on the water off Haida Gwaii for nearly two weeks on a hunch they might find the rarest whales of them all.

The marine mammal scientists from the Department of Fisheries and Oceans were observing humpbacks and orcas, but on the final day, they made contact with a North Pacific right whale, one of only 50 known to remain and only the fourth confirmed sighting of the species in Canadian waters over the past 70 years.

“It’s hard to describe that feeling,” Towers said Thursday from Alert Bay. “After two weeks, hundreds of miles under the keel and only one day left, we came upon this massive creature.

“It’s nice to know our efforts were validated because we took a chance on a right whale being there.”

Right whales were hunted to near extinction in the 19th century as tens of thousands of the giant, slow-moving cetaceans were harvested for their blubber and oil by Russian, U.S. and Canadian whalers.

Records indicate three North Pacific right whales were sighted in B.C. waters from 2013 to last week. Archived photographs show the last right whale observed before 2013 was harpooned off the B.C. coast and brought into the Coal Harbour whaling station in 1951.

Towers and Pilkington started the survey this month based on a hunch and old whaling data that showed many of the whales hunted in the last century were taken in the same area off the north coast of Haida Gwaii.

They were able to photograph the whale and capture it on video, including drone footage, over several hours late last Saturday, then again the next morning for several hours, just two kilometres farther away, as it fed close to shore, about 35 nautical miles from their land base.

The scientists also collected skin samples from the whale for DNA analysis.

Towers said the images and samples should tell them whether this particular whale has been seen before in Alaska or Russia, and if the whale is female and possibly pregnant.

He said the right whale was about 15 metres long and appeared to be healthy and robust, feeding with no signs of entanglement or ship-strike scars.

The whale was feeding on copepod, small plankton-like crustaceans that were plentiful in the area.

“It really gave me a sense of what our oceans should look like … this massive creature evolved on our coast and belongs here,” said Towers. “It’s been over a century since most of this whale’s ancestors were all harpooned … but right whales in the North Pacific are still on the brink of extinction.”

Jackie Hildering, who writes a blog about whales at The Marine Detective and is based on the north Island, said North Pacific right whales were considered easy pickings for whalers. The species weighs as much as 90,000 kilograms and measures up to 17 metres in length, with thick blubber that supplied whalers with vast amounts of oil. The whales are slow moving, often feed near the coast and are easy to approach.

It is estimated that 11,000 North Pacific right whales were killed between 1835 and 1849. The species was considered “commercially extinct” by 1900, according to Hildering.

Canada continued hunting the whales until 1951 and the Russians until 1979, according to Hildering’s blog.