Blind taxi passenger dropped off in wrong location, left to fend for herself 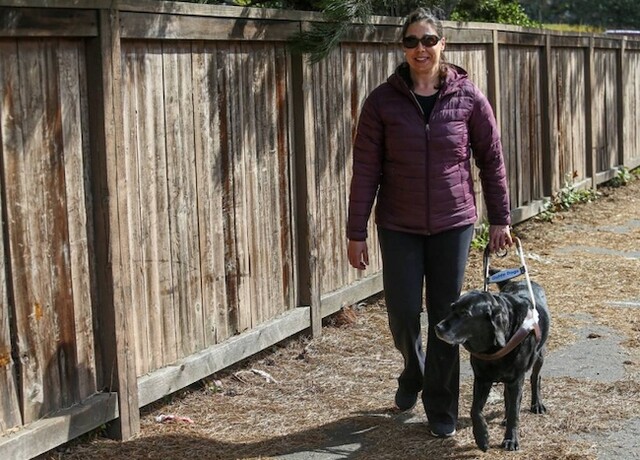 Victoria Nolan, a blind rower training for the Paralympics, was able to hold it together when she was dropped off by a taxi driver in the wrong location with no idea where she was because it’s not the first time she’s had an upsetting experience with a taxi.

Nolan, who is visiting ­Victoria from Toronto for several months in preparation for the Tokyo games, said she ordered a taxi using an app last Wednesday to take her to an appointment.

She has had problems in the past with taxi drivers refusing her a ride because she has a guide dog and said she sensed tension in the vehicle when the driver arrived.

She provided the address to the plaza she was headed to and the unit number of the business. She said the driver told her they’d arrived at the right place, and he agreed to walk her to the door, but as she was putting on her dog’s harness, he sped away with the cab door still open.

Nolan, who has retinitis ­pigmentosa — a genetic disorder that causes a gradual loss of sight — can see light and shadow in a very narrow field, “like looking through a straw,” she said.

Dropped off in the wrong place and an unfamiliar city, she had no idea where she was.

Nolan tried calling the business she was going to, but got their voicemail.

She tried to FaceTime her husband in Toronto to see if he could help direct her, but the connection was too poor.

A few people walked by, but “when you can’t see, it’s hard to just stop someone and get information,” she said.

It wasn’t until she called the cab company and left a voicemail explaining what happened that she broke down. “I was holding it in that whole time, you know, trying to keep it together, and then when I had to explain what happened, I just burst into tears on the phone,” Nolan said.

After a second call to the business, she reached an employee who came to find her. She’d been waiting about two minutes, but “it felt like much longer,” she said.

It’s far from the first time she’s been left in the wrong place by a taxi driver, Nolan said. She used to feel afraid, but now the overwhelming emotions are disappointment and ­frustration.

She believes the driver was upset about having the guide dog in the vehicle, something she’s experienced in taxis across Canada.

These experiences leave Nolan feeling robbed of her freedom and independence, and they can make her hesitate to go out on her own again.

Nolan, who is the head of stakeholder relations and ­community engagement for CNIB Guide Dogs, a program to raise and train service dogs, said she receives calls from across the country relating similar experiences.

Five days after the incident, Nolan got a call from Yellow Cab of Victoria apologizing for her experience. She was told the company would refund her fare and make a donation to the CNIB guide dogs program.

The driver was suspended for three days and is required to retake accessibility training through the company.