Mining work still up in air 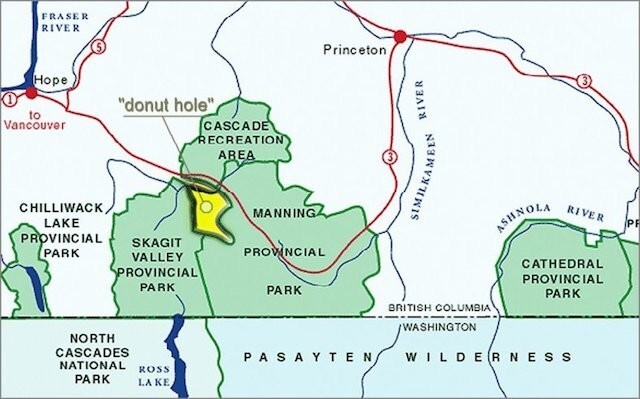 The provincial government is still considering proposed mineral exploration plans for the so-called “donut hole” between Manning and Skagit Valley provincial parks, years after it was first planned.

Imperial Metals filed a Notice of Work back in March 2018 for a conventional diamond drilling program that would impact 0.35 hectares within the unprotected area south of Highway 3.

When Skagit Valley was elevated to provincial park status in 1996, the 5,800-hectare "donut hole" was left out due to mineral claims dating back to the 30s.

Imperial Metals, the current owner of the claims, is now seeking to probe the area in search of copper and gold, something that has upset environmental groups on both sides of the border.

The company announced to shareholders last month the results of a packsack drilling program within the donut hole. No permit is required in B.C. to drill test holes with the handheld equipment used.

“This discovery is the first primary gold occurrence in the 100 year history of exploration on the property,” Imperial Metals said in the news release dated Dec. 21.

The company says it is still awaiting authorization of its full drilling program to follow up this year “on this exciting discovery.”

Imperial Metals vice president of exploration Jim Miller-Tait told Castanet in an email that a notice of work application typically takes two months to process, “not the current 33 months.”

The Ministry of Mines did not respond to questions on why a decision on the proposed work has been delayed for so long, but environmental groups in both Canada and the U.S. have been campaigning hard against it.

In 1984, the B.C. government and City of Seattle ratified the High Ross Treaty, which ended decades of negotiations sparked by the Seattle electricity utility’s plan to raise the water level behind Ross Dam, which would have flooded 5,000 acres of B.C. farmland and recreation space.

Under the treaty, Seattle agreed to not raise the dam for 80 years in exchange for purchasing power from B.C. at a discount. The treaty also formed the creation of the Skagit Environmental Endowment Commission, which is co-chaired by an American and a Canadian, in an effort to protect wildlife habitat and integrity of the Upper Skagit watershed. The donut hole sits within the watershed.

In response to pressure from south of the border, BC Government announced in December 2019 that it would ban logging within the donut hole. At the time, the Skagit Environmental Endowment Commission said it was working on acquiring the mining rights in the area from Imperial Metals to fully protect the area.

But with the promise of gold in the area, Imperial Metals is prepared to push ahead with its exploratory drilling program should the province approve it.

“All we need is the permit,” said Miller-Tait.

Former B.C. Premier Mike Harcourt called on the government in an op-ed last year to retire the mineral claims in the donut hole and protect the area as a provincial park. The B.C. Union of Indian Chiefs has also come out opposed to the work.

But at this point, it is anyone’s guess — be it environmentalist or mining executive — when the government will make up its mind.