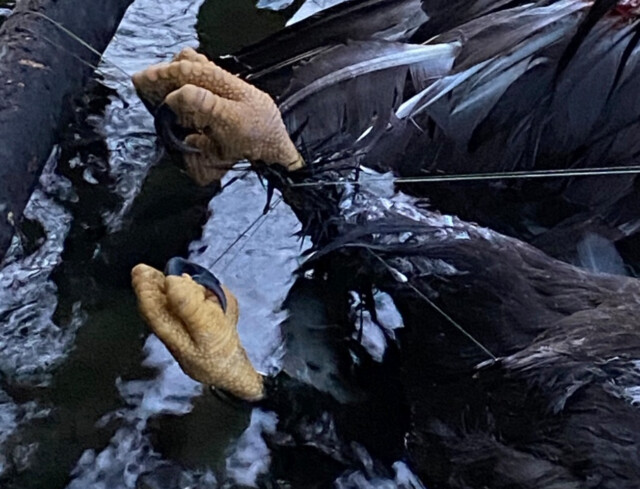 As a rafting guide, and owner of Squamish Rafting Company, Hazzard Roney is accustomed to seeing bald eagles, but not like this.

Roney, who has worked and lived on rivers most of his life, disentangled a dead eagle from fishing line along the Cheakamus River on Dec. 23.

One of his guides first saw the eagle, which had its talons wrapped in fishing line, just above Sunwolf Riverside Resort during a commercial tour down the river.

"They weren't in a position to do anything about it at that point," Roney said, adding that the guide came back and told him about it.

Roney walked in and retrieved it, but first took a photo of it and called OWL (Orphaned Wildlife) Rehabilitation Society, an organization he volunteers for.

The bird, which he estimates was about five-years-old, was then turned over to officers from the Conservation Officer Service (COS), who Roney understands passed it on to First Nation members locally.

There was dead salmon nearby, so Roney assumes the bird had come down to feed when it got caught in the line.

He said the situation serves as a teachable moment for everyone in Squamish to double down on leaving no trace in the wilderness.

He said the fisher may have tried to retrieve the line, but been unable to. He noted that with the river, debris can also be swept down and gather along the shoreline.

This isn't the first time he has come across a dead eagle — he found an electrocuted bird out in the Callaghan Valley a few years ago — but hasn't seen a lot of dead adults.

He said the incident has made him think about the levels of challenges that birds and other wildlife have to navigate — the larger infrastructure that humans create, such as developments and roads; the rules and regulations at a provincial level; and, the actions of individuals.

"If the habitat is being degraded by bigger things, us as individuals, let's try to do our best not to further that degradation of their environment."

The rivers are essential to all wildlife in our area, he added.

"It is like their store," he said. "So we need to exercise an even higher level of co-existence and tread lightly on the land around the river because it is an important area for those animals."

An essential role for his guides is to educate the public about eagles and leaving no trace, along with showing visitors and locals our wildlife and landscape, he said.

Roney's company also helps out with the Squamish Environment Society EagleWatch eagle count, which is scheduled this weekend, though it is pared down due to the pandemic.

Bird's eye view of the issue

Martina Versteeg, the raptor care supervisor at OWL Rehabilitation Society said that it is not uncommon to hear of birds getting caught in fishing line, especially barred owls and other species.

"We see a lot of barbed wire injuries and the fishing line injuries and sometimes it is not as simple as just... cutting off the line because it can be wrapped around,... cut off blood flow and basically kill the tip of the wing or cause permanent damage," she said, adding any animal found injured should be examined by a rehabilitator.

"Some of the cases need medical intervention and medicine to get the blood flowing again to the tip of the wing."

But this type of injury is not the top cause of harm to raptors, Versteeg said.

The top culprits are birds being hit by vehicles or poisoned by lead shot left in dead animals.

"Eagles will scavenge it and they get sick and die from that or they can get sick and [become] a little less agile and are more likely to hit windows and cars," she said.

"We are really trying to educate people on switching to steel and other types of ammunition that don't have lead in it."

The rehabilitation centre also sees a fair number of orphans each year, from loss of habitat and other factors. They also see broken wings from birds getting into fights or hit by cars.

Electrocutions are another problem for eagles when they perch on power lines.

The organization is working with BC Hydro to have the Crown corporation add perches where appropriate so the birds aren't so close to the powerlines.

Almost all injuries to eagles and other birds of prey are human-caused in some way, Versteeg said.