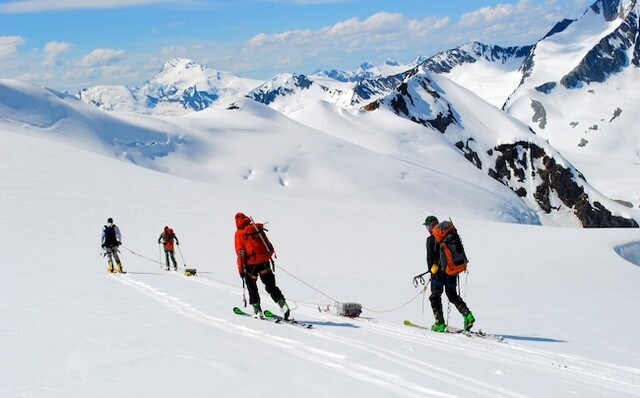 A research team led by the University of Northern British Columbia has found glaciers in the Columbia River basin are significantly larger than originally thought, but also predicts their days remain numbered due to global warming.

From 2015 to 2018, they used ice-penetrating radar, towed by skis, to measure the thickness of five glaciers in the area nestled in the province's southeast corner. From there, they analyzed more than 34,000 data-points over 182 kilometres.

And from that data they found that glacier thickness is, on average, 38 per cent thicker than previous computer model estimates. They also calculated that the ice volume for the Upper Columbia Basin is five times the volume of Okanagan Lake.

The first-of-its-kind research in the Columbia Mountains was published this fall in the Journal of Glaciology. Ben Pelto, who successfully defended his doctorate dissertation in October is the lead author in the study.

“Our study aligns with evidence from separate studies which found that glaciers in the basin will lose 60 to 100 per cent of their ice by 2100, depending on green-house gas emissions,” Pelto explains. “Disappearance of these glaciers will negatively affect the basin’s surface hydrology, freshwater availability and aquatic ecosystems, potentially affecting fish stocks and habitat.”

Co-author and Pelto's PhD supervisor, Dr. Brian Menounos said: “There is little doubt that our glaciers will continue to melt throughout the remainder of this century, and this retreat will arise from our continued use of fossil fuels,”

Five of the seven glaciers the researchers studied lie within the Columbia Mountains, including Conrad, Kokanee, Zillmer, Illecillewaet, and Nordic glaciers, while the West Washmawapta and Haig glaciers lie within the Rocky Mountains.

The research was supported by the Columbia Basin Trust, Pacific Institute of Climate Solutions, Natural Sciences and Research Council of Canada, Tula Foundation, BC Hydro and other agencies.