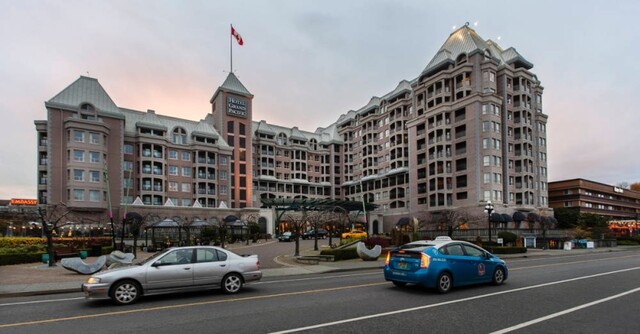 Reid James manages one of the largest hotels on Vancouver Island. But these days, the 304-room Hotel Grand Pacific is a shadow of its pre-pandemic self, using only one of its two towers and operating at razor-thin occupancy levels of 10% to 15%.

There are still a few business travellers deemed essential amid COVID-19 and, up until Thursday, the Grand Pacific was catering to a scattering of guests from up-Island here to do some shopping, and from the Lower Mainland on quick getaways.

But with the province asking British Columbians to avoid non-essential travel, ­cancellations are rolling in.

Like many in the hotel ­industry, James has watched occupancy rates dwindle over the past several months.

The U.S. border closure was a stinging blow. Inter-provincial travel helped over the summer, but now many hotels are just hanging on, hoping COVID cases level off in time to salvage a Christmas season.

“Being an independent hotel, it’s an extra challenge for us,” said James.

“I have a significant sales team to bring in groups to fill the hotel. We need the border open to do that, or at least get to 85% to 90% occupancy.”

He said smaller boutique hotels equipped with ­kitchens will have better chances of improved occupancy over the winter months, including attracting snowbirds from other parts of the country for long-term stays.

James said the hotel isn’t refusing reservations, but is reminding potential guests of the provincial health officer’s recommendations about travel.

At the Hotel Rialto in ­downtown Victoria, general manager Natalie King said 90% of her phone calls Friday were for cancellations. She said ­occupancy has dropped about 65% from last week.

“The first week of November was looking optimistic, and then yesterday the tap shut off,” said King.

The Rialto had been enjoying a small surge in leisure travel from up-Island and the Lower Mainland, as well as some ­business travellers.

“All you can do is follow the guidance and hope it has a ­positive impact,” said King.

“People did have the option to get away within the province at the very least, and now. … It’s really sad from a business perspective for [the virus] to get worse than it was. We just have to keep a stiff upper lip [and] hope it goes down.”

Reid is hoping the population buys in, despite the downturn in business. “If we can all co-operate and do the best we can to reduce the case count, we may be able to salvage ­something. Maybe we can get a little business for Christmas shopping, at least something.”

The B.C. Hotel Association said the industry has been hit hard since March. There were small upticks in room occupancy in some areas of the province over the summer and fall, but overall occupancy has been halved to about 30% for the year compared with 2019.

The latest hotel data from Victoria’s Chemistry ­Consulting, showing September results, has average occupancy for the first nine months of 2020 at 38%, down from 77% in the same period in 2019.

The average daily room rate in the same period slipped by $46 to $152. Revenue per available room, considered a key metric in the industry’s health, was down to $58 — a tumble of about $94 from a year ago.