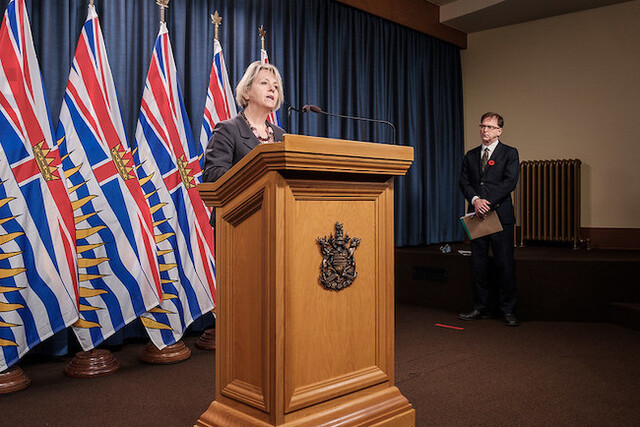 Provincial health officer Dr. Bonnie Henry has expressed her elation at the idea of adding a Pfizer COVID-19 vaccine to British Columbia's pandemic-fighting toolkit by early 2021.

On Monday, Pfizer reported an early peek at its vaccine data suggests the shots may be 90 per cent effective at preventing COVID-19.

Prime Minister Justin Trudeau spoke later that morning, telling Canadians he is very encouraged by the news from Pfizer, and hopes a vaccine can roll out across Canada within the first three months of next year.

It was a sentiment echoed by Henry during Monday's provincial COVID-19 briefing.

"I think it's fantastic, and that means we're on track for potentially having this vaccine available both around the world but here in Canada and in B.C. in the first quarter of 2021 ... so that is a light at the end of the tunnel.

"This is preliminary results that have been released by Pfizer, so that's the caveat. We have not seen the data published publicly, but it is really positive news and I'm quite excited about it."

The vaccine is currently in phase three trials, and more than 44,000 people in countries around the world are taking part.

However, Henry says the logistics of getting the vaccine into communities, particularly those outside of large cities, could prove difficult.

"The challenging thing with this vaccine is that it needs to be stored at ultra-low temperature, minus 70, and so there's not a lot of minus 70 freezers that are available in our communities, and it means the logistics of getting this vaccine are going to be complicated."

She says the BCCDC has been working in partnership with Health Canada and the public health agency to ensure the logistics are in place to get the vaccine as soon as it is approved for use and made available.

"It's not going to be easy, but early in 2021 we should have vaccine to add to our tools to stop this pandemic ... and when we talk about vaccines against a virus like this, 90 per cent is really good.

"We know that if we get at least 50 or 60 per cent protection, that is going to make a major difference in stopping the spread and protecting people."

Henry acknowledged that although the vaccine will initially be in limited supply, those in vulnerable groups such as seniors and healthcare workers will be prioritized to receive it first.