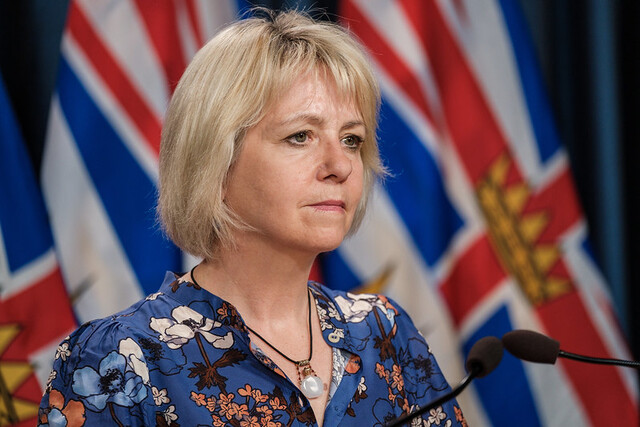 Provincial health officer Dr. Bonnie Henry has announced a new order limiting the number of people who can gather in private homes.

Residents are now only able to gather with their immediate household, plus six additional others. Those who come from a large family may find six others is too many, says Henry.

The 817 new cases announced Monday broke records, with the highest number of single-day and three-day case totals identified since the beginning of the pandemic. There were 28,125 tests were completed over the weekend in B.C. equating to a 2.9 per cent positivity rate.

"We have seen a notable increase in new cases and transmission of COVID-19 as a direct result of social gatherings in private homes," says Henry.

The increase reveals the effects of family gatherings that happened Thanksgiving weekend, she says.

"Too often over the last few weeks we've been hearing stories, where people are trying to put aside the safety plans, that feel it's ok to have a few additional people, or for people to mix and mingle and unfortunately we have seen spread in these environments.

“These are important considerations moving into the next few months where there is going to be a lot of temptation.”

"It's not lost on us that there are many more celebrations coming up, not least of which is Halloween this weekend. We've said this before, and I have been very clear on this. We need to focus on small groups outside.

"This is not the time for Halloween parties ... that is not what we need. That cannot happen, and now there is an order in place that restricts that."

She acknowledged the new order appears to be the opposite of cultural norms which place value on connection and community, but residents must act differently in the midst of a pandemic.

“Most homes are not large enough to have 50 people, or 30 people, or 20 people. Now that we are moving into the season where we can’t be outside as often as well, we know that risk goes up.”

The new order is similar to the restriction placed on vacation and rental homes during the summer when COVID-19 cases peaked in the province.

She hopes further enforcement won't be needed if British Columbians follow the new rule, but says if people disregard the order, additional measures will be taken.

“The orders are enforceable by bylaw officers, police officers and environmental health officers.”