Gourdgantuan: This 923-pound pumpkin is on display in North Vancouver 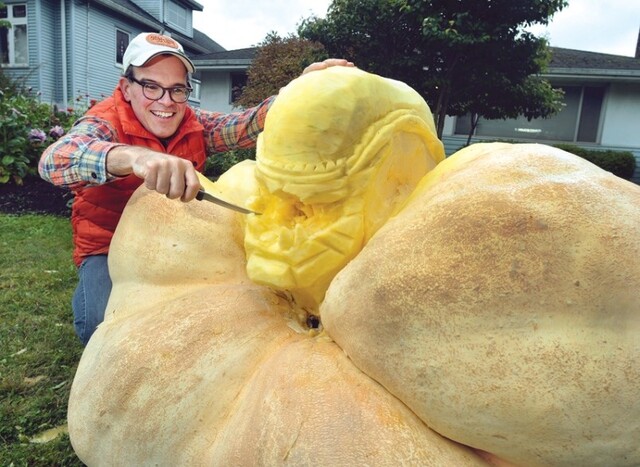 Photo: Contributed
Gourdgantuan North Vancouver champion pumpkin grower Jeff Pelletier shows off his 923-pound (418-kilogram) pumpkin, Muriel. The gourd, with its carved alien head, will be outside his home on the 600 block of East Seventh Street until Halloween.

When it comes to pumpkins in B.C., they don’t get much bigger than Jeff Pelletier’s.

For the first time ever, North Vancouver’s gargantuan gourd grower has put his prize pumpkin on display on the North Shore.

Pelletier sourced the seeds for “Muriel” (named for his late grandmother) from a TV meteorologist in his home state of Maine. Sadly, Muriel didn’t grow to the same size as the 1,649-pound monster she descended from. When Pelletier called in a crane to move the pumpkin to his front yard on Saturday, it weighed in at 923 pounds.

“We didn’t have the best growing season this year. It was quite cool and wet during the late spring and early summer,” he said.

Normally, Pelletier enters his backyard behemoths into the Great Pumpkin Commonwealth Competition, held in Langley. The pandemic put a stop to that this year, so Pelletier asked a master carver to come and transform Muriel into a work of art for the enjoyment of his Queensbury neighbours.

“No one in the neighbourhood really gets to see them except for peeking over the back fence,” he said.

Carver Robert Turriff chose a Xenomorph from the Alien movie franchise as his inspiration.

With a preservative solution, Pelletier expects the pumpkin will last until Halloween, after which time he’ll harvest the seeds and compost the rest.

The seeds aren’t for roasting, though. It’s more like a champion steed being put out to stud. Pelletier has buyers lined up for Muriel’s seeds in Japan, Korea, France, the United Kingdom and all over Canada. Money raised from seed sales is how he funds his habit.