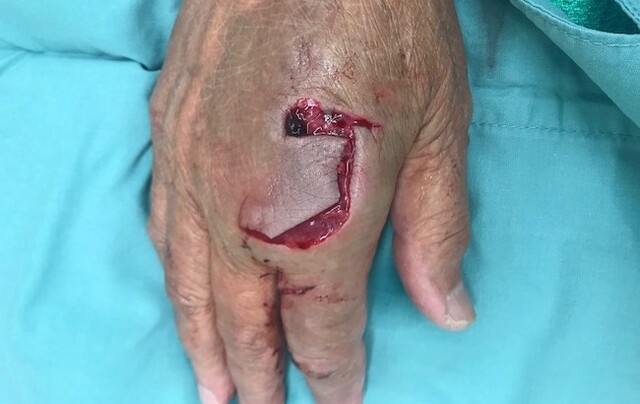 The family of an 80-year-old Richmond woman mauled by a dog is warning the public to beware after a terrifying attack.

According to Davina Oszla, her mother-in-law, Gian Ozla, was out for her twice-daily walk at around 7 p.m. on Monday when she heard a dog barking close to Francis and Kirkmond roads, just west of No. 1 Road.

Seconds later, she was set upon by what eye witnesses and police officers later described as a “pit-bull type” dog, which jumped on her, causing her to fall onto the road and hit her head.

Dazed from the impact, she looked up to see the snarling dog lunge at her as she put up her hand to defend herself.

It was then, according to Davina, that the dog clamped its jaws around the frail woman’s hand, before starting to pull back, with her hand still firmly in its grip.

“Luckily, there was a young gentleman who was putting his garbage cans away. He saw this and ran over making noise, stomping his feet. The dog let go, but was trying to come back at her,” said Davina.

“By that time the (dog) owner came out and I guess got the dog inside. There was blood all over the road and (the man who saved her) flagged down a car to call an ambulance.

“The ambulance station is right there at No. 1 and Williams, so they were there very quickly.

“I find it all so upsetting as she is a very kind and cheery 80-year-old. She doesn’t deserve this at all. She is so upset as well. It breaks our hearts.”

In a bizarre twist, however, Davina was told how the dog owner continually tried to intervene when the paramedics were treating Gian, pleading with her not to call the police as the “dog was his life” and he didn’t want it to get put down.

“The paramedics had to call the police as the (dog) owner wasn’t letting them treat her,” added Davina.

“She doesn’t speak English, but (the paramedics) managed to call us and we raced over. She was in shock. It was a horrible ordeal.

“But when we got there the dog owner started shouting at me not to call the police.”

Gian was taken to hospital to be treated for her gaping wound and for concussion.

However, the ordeal was still far from over as, according to Davina, the dog owner turned up at Richmond Hospital, demanding to see Gian and the family and again pleaded with them not to call the police.

“She’s better now; she was at the hospital until about 3 a.m. last night,” Davina said Tuesday.

She has heard unconfirmed reports that the dog has bitten someone before and is frightened it will happen again.

Davina has been told Richmond RCMP officers have tried to speak to the dog owner, but he refused to answer the door.

“Without a warrant, they couldn’t go enter the home,” added Davina. “I’ve been told the city’s bylaw department is also investigating it."