This B.C. woman rode across Canada to honour her sister

A bike ride to remember 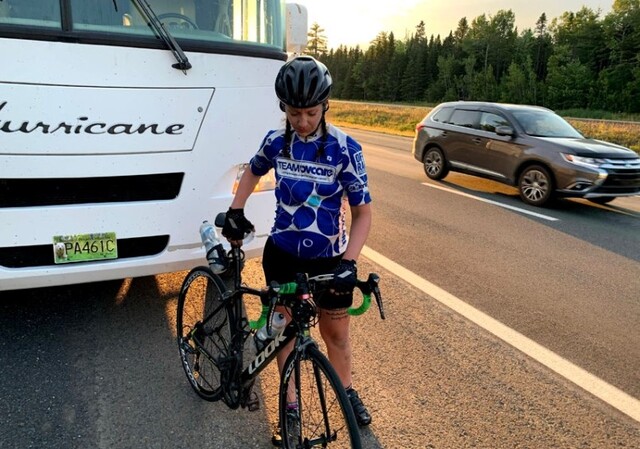 It was near the end of 20 straight days of riding her bicycle with almost no sleep, nearly 6,000 kilometres across this vast country, that Bianca Hayes called upon her sister for help.

The 29-year-old from North Vancouver was exhausted, her hands reduced to rigid claws, and it was pitch black in the middle of the night as she approached the end of her ride, Halifax, N.S.

At least, the map in her head said she should be approaching Halifax. She’d departed from Vancouver nearly three weeks prior and ridden all across Canada, across the mountains of British Columbia, under the vast open skies of the Prairies, through the seemingly endless (and slightly unnerving) beauty of barren Northern Ontario, across stunning Quebec and down into the Maritimes. Her goal was just down the road now, but she pedalled and pedalled and nothing seemed to change in the black night, the unending white line under her wheels refusing to turn into a finish line.

Her mind screamed: “How much longer is this going to go on for!” Then she asked her sister for help.

“That was really when I started talking to her and just, you know, asking her to help me finish,” she said. “And hoping that she was proud of me.”

The bike ride started 20 days before that moment, but the journey began years before. Bianca Hayes grew up in North Vancouver, attending Collingwood School. Her world took a drastic turn when her sister Katrina, five-and-a-half years older, was diagnosed with ovarian cancer. 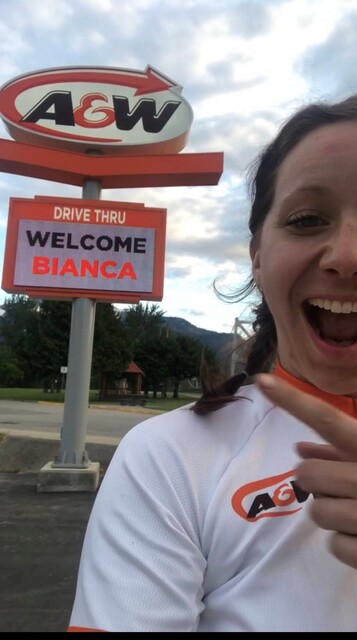 Photo: Bianca Hayes
Bianca Hayes gets a welcome message at an A&W restaurant. The chain, headquartered in North Vancouver, sponsored her ride.

In 2017 Bianca got a job with A&W and her new co-workers sized her up as an athletic young woman and, not knowing her family history, enlisted her for the restaurant’s Ride to Conquer Cancer cycling team.

“I hadn't ridden a bike in almost a decade at that point,” Bianca said. “They loaned me a road bike and I rode a little bit around the city. … The Ride to Conquer Cancer, the following year in 2018, was the first real bike ride that I ever did.”

She loved it — she’d caught the cycling bug. But tragedy hit home that same year. Katrina, age 32 and with a three-year-old son, died of ovarian cancer in 2018.

“Watching her deterioration and watching her battle with that disease, it was just so horrific to see everything,” Bianca said. “And then just with how young she was and to think about how much life she would have had left and how much more she would have been able to do, it really galvanized me and ignited me and made me want to stand up and just do as much as I possibly could.”

She decided to ride. The plan was an audacious attempt to set the Guinness World Record for fastest ride across Canada. The official Guinness ride definition was from Vancouver city hall to Halifax city hall, choosing your own route so long as it followed roads and paths legal for cycling. The male record is 13 days six hours and 13 minutes. Guinness set the threshold for a women’s record at 15 days, something which has never been officially accomplished. Bianca was determined to be the first.

She set out, heading east from Cambie Street, on June 16.

Along for the ride, which was sponsored by her friends at A&W, were her boyfriend and a videographer in a rented RV. Day 1 got them to Kamloops, and from there it was the ups and downs of the Trans-Canada Highway through the mountains. And then, emerging from the Alberta foothills, Bianca beheld a sight she’d never seen before.

“In the Prairies and in Manitoba, you just look up and it’s just clouds and sky as far as the eye can see,” she said. “It’s absolutely beautiful. It was one of the most beautiful things I've ever seen. I wanted to just lie on my back and stare at the clouds for hours. … It was absolutely breathtaking. It made for a beautiful bike ride.”

For the most part the roads were good and the traffic friendly, all the way through to Northern Ontario, where she encountered her greatest enemy of the trip.

“Before the real lake country and cottage country starts in Ontario, you sort of go through a little bit more sort of desolate Northern Ontario where the towns are really spread out and you just have sort of marshes there,” she said.

“I started one morning and I got a flat within a few minutes, and my boyfriend, who was in the support vehicle, had already driven off and I couldn't see him anymore. And as soon as I stopped, there was this swarm, it must have been like 100 mosquitoes, right in front of my face, like going into my ears and my hair and going through my fingers that I was trying to cover my face with, and just attacking me. And I called him in an absolute panic to come back and save me and I was just running around trying to get them not to land on me. The least happy memory I have of the trip was that. That was close to a breaking point where I almost didn't leave the RV again.”

She plucked up her courage though and went back out to face the little fiends, soon enjoying a much more tranquil and beautiful part of Northern Ontario followed by an incredible trip through Quebec that included a very bike-friendly system of cross-province paths that she did not know existed before crossing the border.

The Ontario/Quebec border also had a less enjoyable surprise in the form of a rail crossing with an abnormally wide gap in it.

“My wheel went into it and then turned, and I just slammed onto the ground,” she said. “Thank God for helmets — I cracked my head pretty hard, but for the most part it was just some surface-level scratches and stuff which have mostly healed up now.” 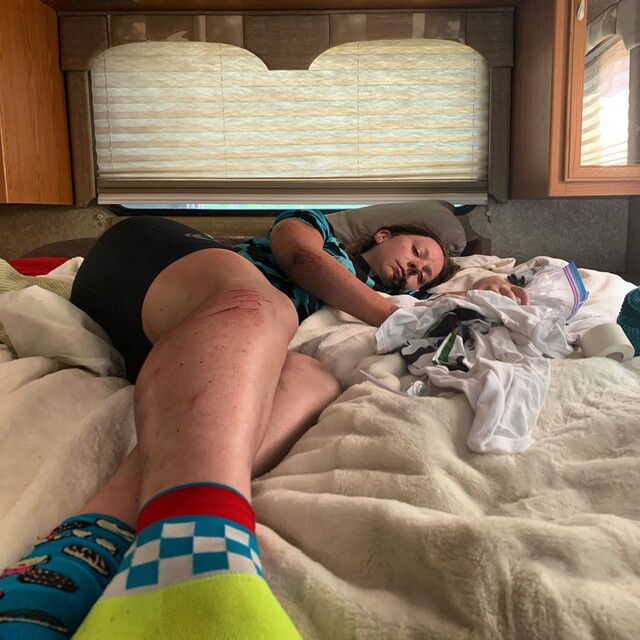 Photo: Alan Hogan
Sleep comes quickly during breaks while on a 5,900-kilometre ride across the country.

In all it was a beautiful ride, but an extreme challenge as well. She’d start riding at or before 4 a.m. each day, and stay in the saddle until around midnight. She’d sleep a maximum three hours per night, adding in a number of micro-naps and food breaks throughout the day. Sometimes sleep would creep up while she was still on two wheels.

“Those lines get really mesmerizing and I would notice that I would almost slip into dreaming and then be on the shoulder and into the gravel before I even realized it,” she said. “So there were a couple scary moments like that, but sort of adding in micro naps and then slamming as many Red Bulls as I possibly could seemed to really help wake me up.”

Riding at night was the worst, and Bianca said the scariest part of her ride was that narrow highway near Halifax.

“There was a really dark night the night before we finished as we were going into Halifax, and I was a little scared and it was a really dark highway, a lot of trucks and you know, it was just sort of going through all of the emotions of being so close to the end but still, you know, hundreds of kilometres out.”

It wasn’t the first time she’d talked to Katrina while riding. Those long hours alone on the road were vitally important to Bianca in the weeks and months following her sister’s death.

“All that solitude is really when I was able to process my grief and think about her and, you know, it's the only time that you can really talk to yourself or talk to somebody who isn't there without looking like a crazy person,” she said. “I would sort of talk to her and it really helped me get past some of my grief, and it seemed like a much healthier outlet than some of the anger that I felt. It was a healthier way to deal with it for sure.”

And so there, in the middle of the night on a narrow road a few hundred kilometres outside Halifax, Bianca spoke to Katrina. She asked her for help. She asked her if she was proud.

Then she put her head down and pedalled all the way to the end of a 5,900 kilometre ride.

It was July 5, and Bianca was riding up to Halifax city hall. 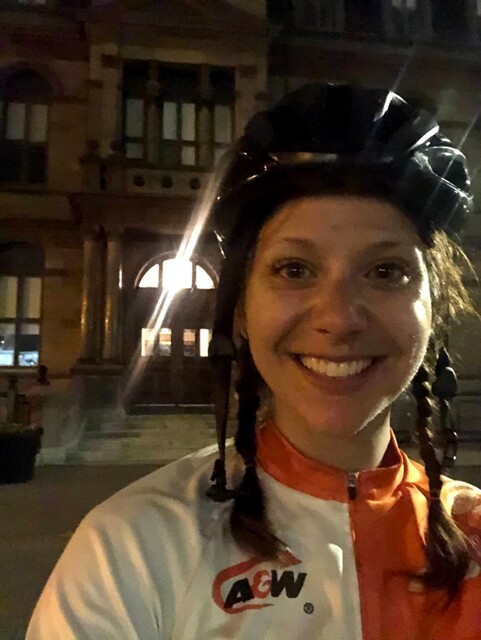 Photo: Alan Hogan
Bianca Hayes is all smiles outside Halifax city hall after completing a 5,900-km ride across Canada. To date Hayes has raised approximately $40,000 for ovarian cancer research.

“As soon as we got into the city and there were lights and I could tell that we were so close to the end, I just felt just elated,” she said. “It was a beautiful way to finish.”

She didn’t get the official record she was after, as she didn’t finish in the requisite 15 days. Bianca said she’ll try again in 2022, and with more training and one attempt already under her belt, she aims to do the trip in 14 days.

She completed the ride though, something that was no foregone conclusion for an amateur rider who has only been seriously cycling for a few years.

“I never would have thought that I would have been able to do that,” she said. “And now looking at it, I'm still a little surprised that I was able to push through. It was a pretty cool experience.”

She’s raising funds now which are being split equally between the BC Cancer Foundation and Ovarian Cancer Canada. Ovarian cancer doesn’t get the same attention as breast cancer and prostate cancer, she said, and that lack of funding and awareness leads to worse outcomes for those who get the disease. Bianca wants to do everything she can to make sure others don’t have to go through losing a sister, a daughter, a mother.

“It's the fifth most common but the most deadly of all women's cancers,” she said. “As long as there's fundraising and there's people paying attention, then we can really make a difference, and really see longer lives for people who get this disease.”

She’s raised approximately $40,000 already with her cross-Canada campaign and is aiming to get to $100,000 by the end of the year. To find out more or make a donation, visit biancahayes.com.