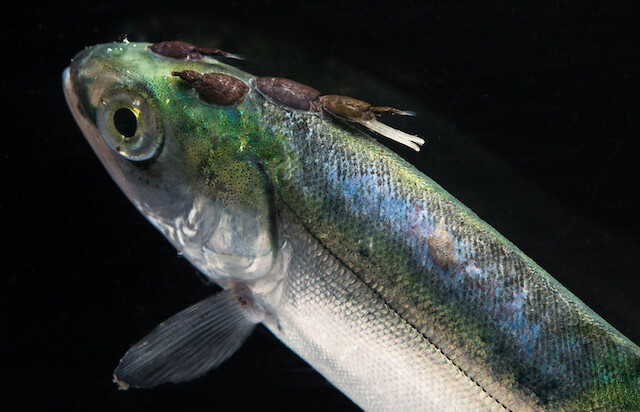 The results of a new wild salmon study are skin crawling: 94 per cent of wild salmon fry in the Discovery Islands — to the east of Campbell River — had sea lice attached. The infected fry hosted an average of seven of the parasitic lice.

Sea lice on juvenile salmon can drastically reduce chances of survival, whose small bodies can not handle the damage caused by lice. By rubbing off fish scales and eating the mucus membrane underneath, the lice expose fish to water-born pathogens.

Further north in the Broughton Archipelago where five fish farms were recently closed, numbers are lower: 34 per cent of wild juveniles had an average of 1.3 lice. Nootka and Clayoquot Sounds on the west coast showed 87 and 94 per cent infection rates respectively.

The report was released Thursday, June 25 by B.C.’s First Nations Leadership Council, along with scientist Alexandra Morton who led the study.

The leadership council, made up of political leaders from three main First Nations associations in B.C., officially called for an end to ocean-based fish farms in B.C.

‘Namgis First Nation elected chief and hereditary chief Don Svanvik is glad to see other First Nations join the fight. His Nation lives on Cormorant Island in the Broughton Archipelago, and has fought against ocean fish farming for years.

The high numbers of sea lice this spring is a direct result of fish farms dotted along wild salmon migration routes, maintains the report. Adult salmon often swim home to spawn with lice attached, but when they die after laying eggs, the lice would also perish.

“Normally, when the little babies go out, they wouldn’t be swimming through all this lice,” Svanvik said.

However, fish farms provide a docile, year-round host for sea lice. The parasitic lice multiplies in farms, “and shed billions of larvae into the marine currents,” Morton wrote in the report.

Fisheries and Oceans Canada has established guidelines for acceptable levels of sea lice in fish farms, but self-reported data shows that 35 per cent of B.C. farms exceeded these levels.

Dropping salmon stocks is a serious issue in B.C., with impacts on commercial and recreational fishing, First Nations rights and damages to the ecosystem salmon are a part of.

Sea lice are just one aspect of the drop, which is also attributed to “over-fishing, climate change, sediment from industrial forestry, natural disasters such as the 2019 Big Bar slide, and the introduction of pathogens including Heart and Skeletal Muscle Inflammation (HSMI), and Piscine Orthoreovirus (PRV),” according to the leadership council.

“Never mind how delicious they taste, they’re a keystone species. How much are salmon worth to us if they go extinct? They have huge impacts in the ecosystem. Not just in the water as part of the food chain, but on land too,” Svanvik said.

Norwegian-based fish farm owner Mowi which runs several net farms in B.C. directed the Gazette to speak with the B.C. Salmon Farmers Association for comment, who said in an emailed statement that they would reach out to the Indigenous leaders to “engage them in a dialogue.” They went on to say that “the management of sea lice is an ongoing concern. As an industry we are committed to adopting the newest technologies and processes to be better stewards of the environment.”