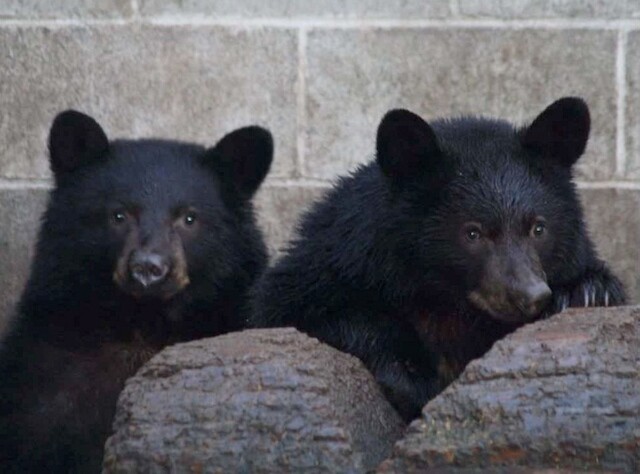 Photo: Times Colonist
Jordan and Athena, rescued bear cubs shown at about five months old in 2015, were successfully released into the wild. Conservation officer Bryce Casavant was ordered to shoot the two eight-week-old cubs on the assumption they were conditioned to human garbage and not candidates for rehabilitation.

A former conservation officer who was fired for refusing to kill two bear cubs near Port Hardy in 2015 is feeling vindicated by a court decision that determined he was improperly terminated.

“A guy can walk a little taller today,” Bryce Casavant said by phone from his home in Port Alberni.

In her June 4 decision, Justice Lauri Ann Fenlon wrote that Casavant’s challenge to his termination as a conservation officer “set in motion an ill-considered series of proceedings” under the Labour Relations Code. Fenlon determined that the labour board did not have authority to address the matter, because Casavant’s dismissal should have been addressed under the Police Act.

Conservation officers in B.C. have status as special provincial constables under the Police Act.

“The appellant’s dismissal related to the performance of his constabulary duties and was governed by the Police Act … The proceedings before the Board should be declared a nullity,” Fenlon wrote in her decision.

Fenlon stopped short of ruling that Casavant should be reinstated in his position, but said she would “leave the parties to sort out the consequences” of her decision.

Casavant made international headlines in 2015 when he refused an emailed order from a superior to kill two bear cubs whose mother he euthanized after she entered a home in the Port Hardy area through an open door.

He took the cubs to a veterinarian, who assessed them and transferred the animals to the North Island Wildlife Recovery Centre. They were released into the wild in the summer of 2016.

Casavant said Saturday he was required to kill the sow because it had entered a residence. But he maintains he had discretion as to whether to kill or spare the cubs, because there was no evidence they had been in the home or become habituated to garbage.

“That kill order is requiring me to discharge my service weapon. You know, there’s a whole host of issues with that. So, I didn’t kill them,” said Casavant, who became a conservation officer in 2013 after leaving a military career.

His decision to spare the cubs led to his dismissal from the Conservation Officer Service and a settlement agreement that saw him transferred to a position in the Ministry of Forests, Lands, Natural Resource Operations and Rural Development at equal pay.

It also sparked a five-year fight by Casavant in the courts that ended Thursday.

Casavant said he refused to give up because he wanted to hold the government accountable.

“For many years, both the union and the government were told that this was an unlawful and incorrect process. And they chose to do it anyways. What I can say is had they followed the correct process, I never would have been removed from my post,” he said.

Casavant said he also wanted to set the record straight on a personal level.

“I had senior-level bureaucrats misleading decision makers, developing records after the fact, making stories up, and saying false, misleading and inaccurate information about me.”

In a letter outlining the reasons for his dismissal, the Ministry of Environment said Casavant had demonstrated an “unsuitability” to work as a conservation officer, listing two instances in addition to the bear-cub incident when he had refused to follow directions.

“It is clear that you will continue to [not] follow instructions and policies in your capacity as a conservation officer if you disagree with them. You confirmed this in your interview with us, when you said that in the future, with the same information you would make the same decision and take the same action regarding the bear situation,” the ministry wrote in an August 25, 2015, letter included in the Court of Appeal decision.

Casavant said both additional allegations were false and misrepresented him. In one instance, the ministry said he conducted an “unknown risk vehicle check” on his own, which he was not authorized to do, but Casavant said he was assisted by a colleague with 20 years of experience

A Ministry of Environment spokesman said the ministry would not be commenting on the decision. The ministry was represented as a respondent in the case by the B.C. Public Service Agency.

A spokesperson for the Ministry of the Attorney General said in an email: “We will be carefully reviewing the decision and will not be commenting any further in the meantime.”

The B.C. Government and Service Employees’ Union, also named as a respondent, said in a statement that it will review the decision and “will be looking to clarify with the government what their intentions are in the case.”