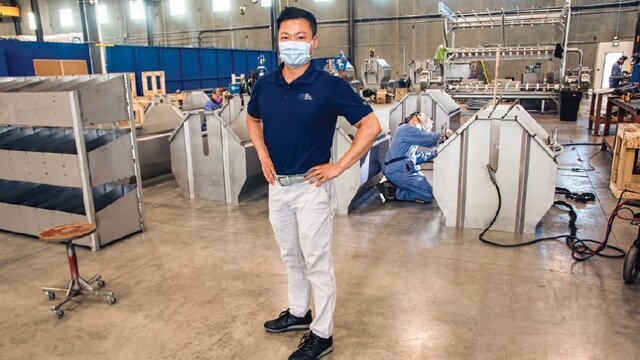 Photo: BIV
Justin Lai, vice-president of sales and marketing, FPS Food Process Solutions Corp.: ?we are lucky that we got a fourth facility in Richmond so we were able to spread out our manufacturing team a little further?

February marked the opening of FPS Food Process Solutions Corp.’s newest manufacturing facility in Richmond. It added another 80,000 square feet of factory space for the Canadian producer of freezing and cooling equipment.

March, meanwhile, gave way to the COVID-19 pandemic in B.C., quickly transforming much of the operations on the floor of FPS’ local facilities.

“We are lucky that we got a fourth facility in Richmond so we were able to spread out our manufacturing team a little further,” said Justin Lai, the company’s vice-president of sales and marketing.

Workers on the floor are abiding by social distancing, lunches are split up to reduce the number of people in the break room and sanitization teams are cleaning up the lunch area between those breaks.

Overtime hours have also been reduced in anticipation of potential slowdowns in the coming months.

But FPS has not laid off any workers during the pandemic; it has instead hired some additional staff.

“The food industry is fairly resilient in that people need to eat,” Lai said.

But not all manufacturers have been as fortunate, according to Andrew Wynn-Williams, the Canadian Manufacturers & Exporters’ (CME) vice-president for B.C.

He said some companies have been able to push through during the pandemic, with orders coming through as they always would or else pivoting their manufacturing capacity to a market in need.

Other manufacturers are “treading water,” while a third group is in trouble, Wynn-Williams added.

“But I would say the smallest group is the group that’s in real trouble,” he said.

As the economy begins to ramp up and more return to work, Wynn-Williams said workers can expect more staggered shifts to ensure social distancing as well as requirements to wear personal protective equipment (PPE).

Wynn-Williams said additional investments will need to be made in new machinery to compete with other nations that are also ramping up operations as restrictions loosen.

That might mean more robotics used on the floor of factories to boost productivity, while workers’ duties are in turn redistributed.

“There’s a myth out there that if you invest in advanced technology machinery equipment you’re going to put people out of work,” Wynn-Williams said. “That’s not true. They’d be trained for different jobs, and their roles are going to change. But the reality is, if we don’t make that kind of investment, we’re not going to be competitive.”

At Vancouver-based Seaspan Shipyards, the shipbuilder has significantly reduced the number of employees working within the cramped confines of submarines, while crews have been spread out across ships to ensure social distancing.

Employees have also been instructed not to gather at gates for entry and exit, while those who need to work near each other are required to don appropriate PPE.

And for workers who remain uncomfortable coming to the job site following the new safety measures, they’ve been told they can stay at home without job repercussions, according to Seaspan CEO Mark Lamarre.

“We won’t be looking the same when we come out of this,” he said, referring to the safety precautions being implemented as well as a shift to remote work wherever possible.

“I’ve even been called out for being too close to somebody out in the shipyards. So it’s a team sport that everybody’s taking seriously.”

Factory workers should also be prepared for employers to deploy contact tracing in a bid to mitigate any potential workplace outbreaks, according to Walter Pela, KPMG’s B.C. regional managing partner.

That means having people maintain logs of who they interact with daily so that if there is a case of COVID-19 on the floor, factories can quickly trace it.

“In some jurisdictions you’re seeing very good use of digital technologies to deal with that,” Pela said, “but even absent those, a manual log of people being more attuned to who they’re coming into contact with [would work].”

He said factories may have to arrange transportation for some workers as mass transit service continues to taper off or if workers feel unsafe being so close to strangers.

“The value of the workforce has increased so dramatically over the past few years, and now the value of keeping your workforce healthy is just going to be that much more important as well.”