BC teen builds huge following in Italy with her TikTok posts

BC teen a TikTok queen 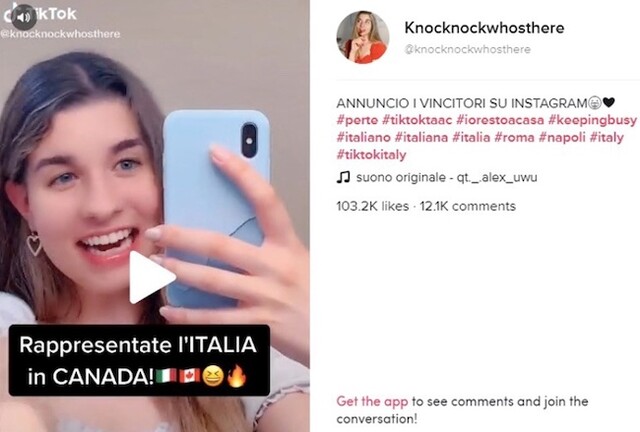 A North Vancouver teen has become a TikTok queen in Italy, garnering more than 400,000 followers on the social media app in just a couple of months.

Natasha Nock, who goes by the handle “Knockknockwhosthere” on TikTok, reaches hundreds of thousands, and sometimes millions, of viewers with each of her daily posts that show her learning to speak Italian.

It’s all been a wild ride for the 19-year-old whose parents are very un-Italian – they met in Canada and have English and Trinidadian heritage.

“I’ve only taken two semesters of Italian at university and it's like Italian 101, Italian 102, so it's like the beginner level completely,” said Nock. “My parents can't speak a word of Italian, they don't understand any of the videos that I make. No one in my family is Italian.”

Her videos, however, have taken off in Italy, garnering her a loyal following. Nock, who is currently studying marketing at UBC, said she has always enjoyed experimenting with video.

“I was that kid in high school that made video projects for like everything,” she said.

Nock is also a language nut – she already knows French and Spanish – and so she decided a couple of months ago to make a TikTok post about the work she was doing in her university Italian class. To her surprise, the post took off.

“It somehow made its way to Italy and I got a lot of Italian followers,” she said. “They were really surprised that someone who speaks English would want to speak Italian. So they were like, super willing to help. And then from there, I just continued to make videos every single day.”

Her following grew rapidly, and two months later her account has more than 410,000 followers, 10.6-million likes, and a recent video was viewed more than two million times and generated nearly 30,000 comments.

“The numbers are so crazy that it's kind of hard to wrap your head around,” she said. “I think it's like absolutely insane, but it's really, really fun.”

The experience has also helped her learn the language, she said.

“Now that I've literally spoken in Italian for like an hour every day for like three months, I’d say it's improved dramatically. I would hope so.”