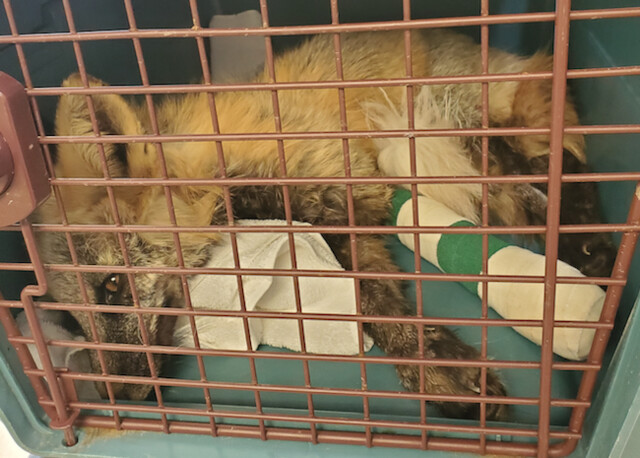 A pregnant fox found dragging a leg-hold trap in Northern B.C. has renewed a call to end the use of the devices.

The Northern Lights Wildlife Society in Smithers is caring for the animal and its three kits after the discovery near Houston, B.C.

The wildlife rehabilitation centre was contacted by residents who had caught the fox after seeing it drag the trap for hours, animal advocacy group The Fur Bearers says.

Four major bones in its front right paw were broken in an open fracture. It is uncertain if the fox will be able to keep the paw.

“The provincial government has shown they are incapable of preventing outrageous acts of cruelty caused by both legal and illegal leg-hold traps,” Lesley Fox, executive director of The Fur-Bearers, said in a press release. “They can point to trapping standards and regulations all they want – the reality is we’re seeing horrific injuries to native wildlife as well as domestic animals like dogs and cats from these traps. As it is the duty of the province to be the stewards of wildlife in the public trust, we are calling on them to finally end the use of these dangerous devices in our province.”

Provincial data reveals that about eight dogs per year are known to die or be injured in traps, the group says.

“Every day, animals are suffering, and to what degree we can’t say because traps are set then left; authorities only investigate traps if there are reports,” adds Fox.

The Fur Bearers has a petition calling for a ban on leg-hold traps at www.TheFurBearers.com/banlegholdsBC.

Polling by Research Co. in November 2019 indicated 79% of British Columbians oppose killing animals for their fur.