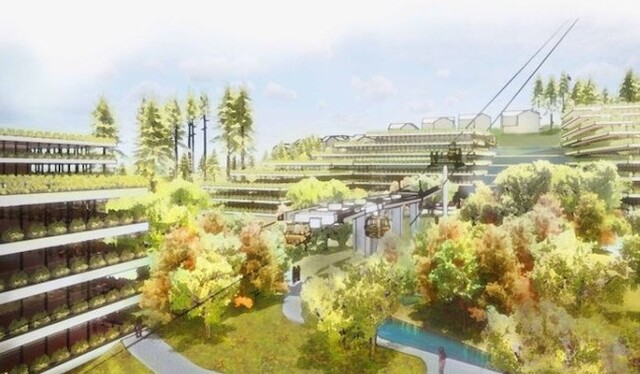 A developer planning to build hundreds of strata and rental units above Highway 1 in West Vancouver is pitching a public gondola as part of the project.

Henson Development is proposing 146 rental and 439 strata units in a series of two-to-12-storey buildings on 8.9 acres. The plan, which is still very much in its preliminary stages, would be to run a two-kilometre air tram from the Marine Drive area to Cypress Lookout.

“The gondola is the bold idea we're exploring, and it would be amazing if we could work it out,” said Dan Watson, planner with Brook Pooni Associates.

Any time land is rezoned for higher density, the developer must pay community amenity contributions to the municipality. In this case, those contributions could be used to cover the cost of the gondola, Watson said, although it’s too soon to say what the long-term operating model would be.

“It's intended to be something that the public could enjoy and benefit from and help address some of the broader transportation issues in the area,” he said.

The land is currently zoned for single-family homes.

Earlier this month, the developer hosted a public meeting where residents had a chance to see gondola proposal. The response, Watson said, was “quite positive.”

“I think people recognize that the district needs innovative transportation solutions and so I think they were quite interested about how to open up access to the Upper Lands and make it easier for people to connect to shops and services down into Dundarave,” he said.