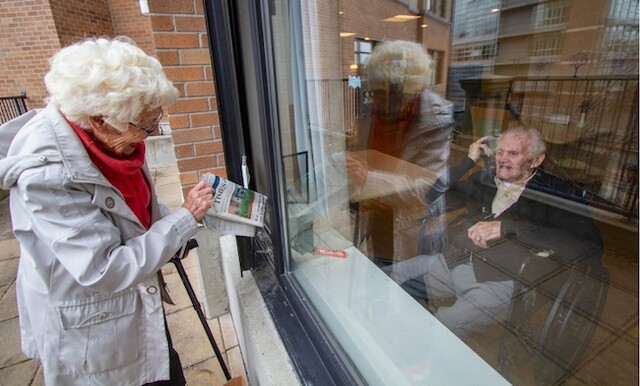 Hilda Duddridge made a promise to her husband of nearly 75 years – and she won’t let a pandemic get in the way.

When Lew Duddridge moved into a care home two years ago after turning 100, Hilda kept her promise with daily visits. After she tucks him in at night, she tells Lew she’ll be back to see him the next day.

On March 16, the care home banned all visitors in an attempt to protect vulnerable residents from COVID-19.

But, that’s not stopping Hilda from making the trip to the Victoria care home to see Lew.

She climbs 18 steps to a second-floor balcony, where Lew meets her at the window.

With Lew on the phone inside and Hilda on the other end outside, it’s just like having a visit together, Hilda said.

His face lights up when she shows him his favourite chocolates, which she puts by the door for staff to collect when she leaves.

“He was smiling and blew kisses,” she said. “I couldn’t imagine how in the world I could not see him.”

To Hilda, their new routine shows that everyone is adaptable and that attitude — and love — is everything.

“It just proves that we can get through anything, if you have patience and look on the bright side,” she said, adding, “Love is the answer to everything. Love makes the world go ’round.”

“They’re a team,” said daughter Glenys Berry. She’s proud of her mother’s attitude that “love will keep us all going,” and of her father for being the kind of person who gets things done.

The family had planned a party to celebrate Hilda and Lew’s 75th wedding anniversary next week, but they’ve had to adapt to the times.

“Things will get better, if we’re patient,” Hilda said. “It will be lovely again to go and see him.”