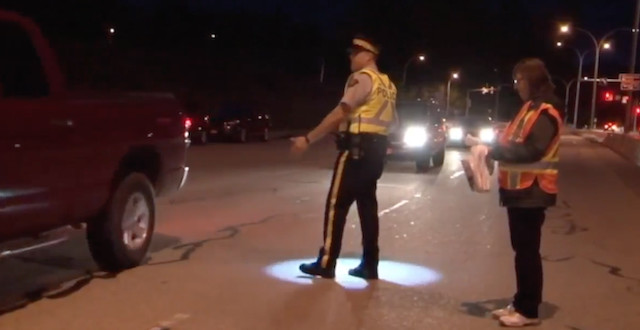 A Nelson-area family is without a vehicle for the holidays after a mother was handed an immediate roadside suspension while being the passenger in a car stopped at a roadblock.

Vancouver lawyer Sarah Leamon says her client was travelling home from a Christmas party on Dec. 13. After a couple of drinks at the party, the woman’s son — a 22 year old police say had an "L" licence — was driving while her husband was in the back seat.

An officer manning the roadblock, satisfied that the driver was sober, started questioning the woman in the passenger seat, asking her if she had been drinking.

When her client confirmed she had been, Leamon says the officer, identified as Const. Therrien of the Central Kootenay RCMP, ordered her out of the vehicle for a roadside breath-test, which she failed.

The vehicle was then impounded and the mother was slapped with a 90-day roadside suspension.

Leamon says the officer’s evidence justified the suspension by noting the small size of the car, a Pontiac Vibe.

“Because it was a small vehicle, the officer felt my client, sitting in the passenger seat, was in close enough proximity to the steering wheel… that she could have easily reached over and grabbed” the controls, Leamon said.

The officer also believed the mother had to be sober to properly supervise her son, an "L" driver, something Leamon called a “completely gross misinterpretation of the law… detached fully from any type of public policy here when it comes to deterring impaired driving.”

“There is no indication my client was anything other than polite, compliant, cooperative, nothing at all — it’s just completely puzzling to me,” Leamon says, adding in close to a decade as a defence lawyer, she’s seen nothing like it.

The 90-day IRP is currently being challenged, but the result of that review isn’t expected until early next year. In the meantime, Leamon says her client is struggling. The family lives in a remote location outside of Nelson and shares the now-impounded vehicle, meaning nobody can get to and from work.

“They are having a very difficult time getting errands done, chores done, it’s the holiday season — now they are facing legal bills in addition to whatever else is going to be thrown at them in terms of fines,” Leamon said.

“This is just such a gross overreach, in my opinion,” Leamon continued, calling the situation “disturbing.”

Sgt. Chad Badry of RCMP West Kootenay Traffic Services confirmed a 90-day IRP was handed to the woman, but police have since recommended it be cancelled.

Badry pointed to the Motor Vehicle Act, which requires those with learners licences to be accompanied by a “qualified supervisor who is at least 25 years of age."

Badry said the immediate roadside suspension was handed to the woman, as she was “identified as the learner driver's qualified supervisor.”

“Earlier this week a full review was conducted of the file by police and a decision was made to recommend the cancellation of the 90-day IRP issued to the passenger,” Sgt. Badry continued. “The matter is now with Road Safety BC.”

He added that they recommend anyone acting as a supervisor for a driver in the graduated licensing program should be “sober and fully prepared to safely provide input at any time to the vehicles steering.”