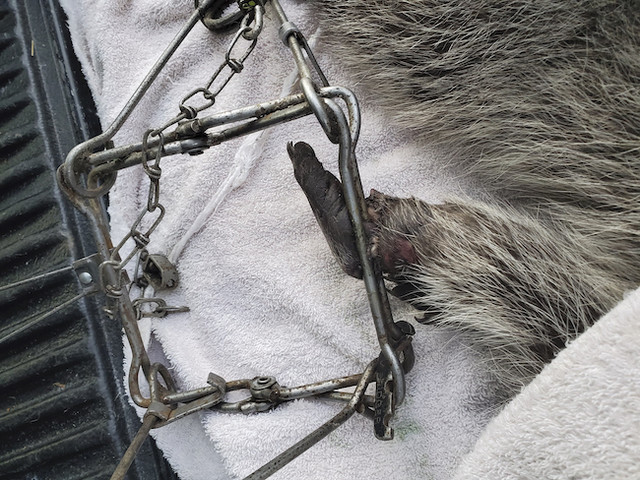 Photo: Contributed
A raccoon with its foot stuck in an animal trap.

“Wildlife rehabilitators Critter Care Wildlife Society has reported that the number of animals they’ve treated or humanely euthanized due to trap-related injuries has more than doubled in the last two years. These traps, which can easily be purchased online or through local and online marketplaces and sales, only accomplish one thing: suffering."

In 2017, Critter Care Wildlife Society had nine cases of animals injured by traps. In 2018, those numbers increased to 15, and so far this year the statistics show a reported 21 cases, not including incidents outside of their range or domestic animals like dogs and cats.

“What the animals really need is for the province to step up,” says Howie. "Every year we’ve asked the province for common sense updates to policy, such as allowing local governments to enact, educate about, and enforce by-laws about traps to curb these incidents, or mandatory signage when traps are being used. And every year goes past with no change, but more individual animals and families suffering. At this point, with all the horrendous injuries we’ve seen and lack of change, it’s hard to believe the province of British Columbia cares about animal cruelty at all.”

The Fur-Bearers was founded in British Columbia in 1953 to advocate on behalf of fur-bearing animals in the wild and in confinement.