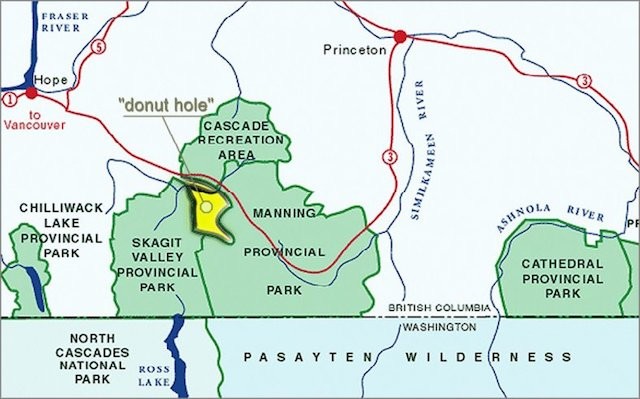 A new round of mineral exploration work proposed for the “donut hole” between Manning and Skagit Valley provincial parks has environmental groups south of the border up in arms.

The provincial government is currently gathering feedback on an application from Imperial Metals for exploratory drilling over the next five years. The work is proposed to take place in the unprotected area surrounded by the two provincial parks.

When Skagit Valley was elevated to provincial park status in 1996, the 5,800-hectare donut hole was left out due to mineral claims dating back to the 30s.

Earlier this month, a coalition of 21 conservation and environmental groups in Washington State wrote in protest to the cross-border commission tasked with preserving the Upper Skagit watershed.

The Skagit Environmental Endowment Commission was formed in 1984 when the B.C. government and City of Seattle ratified the High Ross Treaty. The treaty ended decades of negotiations sparked by the Seattle electricity utility’s plan to raise the water level behind Ross Dam, which would have flooded 5,000 acres of B.C. farmland and recreation space in the process.

Under the treaty, Seattle agreed to not raise the dam for 80 years in exchange for purchasing power from B.C. at a discount. The treaty also formed the creation of the commission, which is co-chaired by an American and a Canadian, in an effort to protect wildlife habitat and integrity of the watershed.

“These activities fundamentally risk and create irreparable harm to the entire Skagit watershed, including downstream impact in the United States,” the April 7 letter from the coalition of environmental groups reads.

The groups maintain the exploratory mining work is not “in alignment or in keeping with the spirit and intent of the treaty.”

In a brief statement to Castanet, the BC Ministry of Mines said public feedback is being gathered on the proposed work until May 17. An online petition against the plan has garnered more than 5,000 signatures.

“The ministry makes a serious effort to consider and weigh all relevant information and perspectives, and is committed to conducting a thorough and comprehensive review,” the ministry said.

This isn’t the first time resource extraction in the donut hole has drawn ire from south of the border. Last year, the mayor of Seattle wrote to Premier John Horgan requesting BC Timber Sales halt logging plans in the area, saying they were “inconsistent with the spirit” of the High Ross Treaty.

Since then, the B.C. government has said all future logging plans in the area are on hold.