BC Wildfire Service are hoping strong winds won’t come whipping towards the Okanagan Valley over the next few days.

Glen Burgess, incident commander for the Okanagan Complex says the worst situation will be an unexpected wind event.

“We still have a lot of fire out there in a variety of places that is uncontained and if we had an unexpected wind event that would cause us problems for sure,” said Burgess.

Drier and warmer weather is forecast for the Okanagan, creating challenges of their own for wildfires already burning.

“It sounds like the winds won’t be as significant as they were a number of days ago,” said Burgess.

Calmer conditions on Sunday is why a planned ignition took place sending a massive plume of smoke high into the sky.

An ignition device called plastic spherical dispenser dropped fire balls onto a 150 hectares patch between two wildfires in Peachland to merge them into one.

“We wanted to get his done today before we got into that hotter, drier weather system,” said Burgess.

The Mount. Eneas wildfire and the Monro Lake wildfire have now been combined to make it easier for firefighters to tackle.

Burgess said more firefighters and resources are coming in daily to tackle the six fires of note in the Kamloops Fire Centre.

“We haven’t had any concerns about the available resources at this point,” he said.

The fire causing the most concern is the Mount Eneas wildfire, last estimated at 1,374 hectares.

Environment Canada's forecast for the next week in the southern Interior does not inspire confidence, with temperatures in the 30s and winds gusting over 40 kilometres per hour.

The B.C. Wildfire Service's chief fire information officer, Kevin Skrepnek, agreed with Luciw, saying the weather outlook for the foreseeable future will be problematic for the Interior — including unpredictable lightning strikes.

Environment Canada says a 30 per cent chance of showers and thunderstorms are possible on Monday night.

Our Alanna Kelly was at Sunday's BC Wildfire Service press conference and she spoke one on one with Glen Burgess, incident commander for the Okanagan Complex for the latest on the BC Wildfire situation as of Sunday at 3:30 p.m. 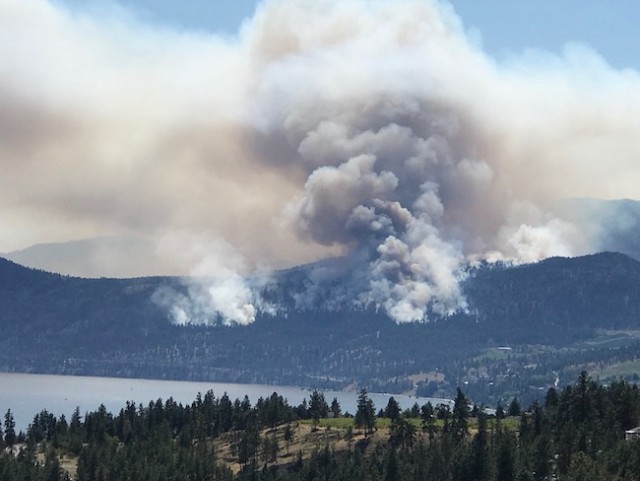