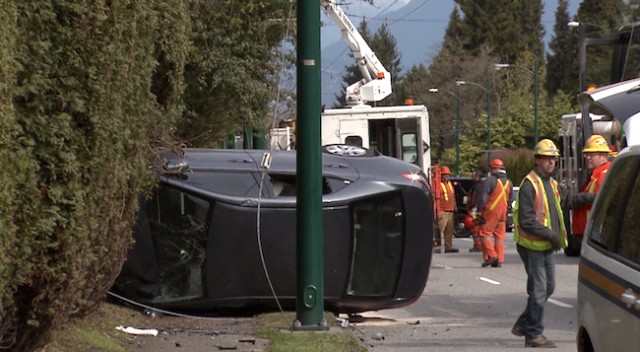 Road rage may have led to a rollover crash in Vancouver's Shaughnessy neighbourhood on Wednesday.

Police say a black BMW collided with a grey Toyota Corolla on Granville Street, knocking the Toyota on its side and up against a utility pole. Downed power lines then sparked a small fire.

Const. Jason Doucette says the Toyota driver had to be extracted by emergency crews and suffered "relatively minor injuries." The BMW driver was unharmed.

Both drivers were co-operating with police, but Doucette said road rage has not been ruled out.

"If someone's displaying some aggressive behaviour, they're trying to bait you in, don't engage. That could escalate things," he told CTV.