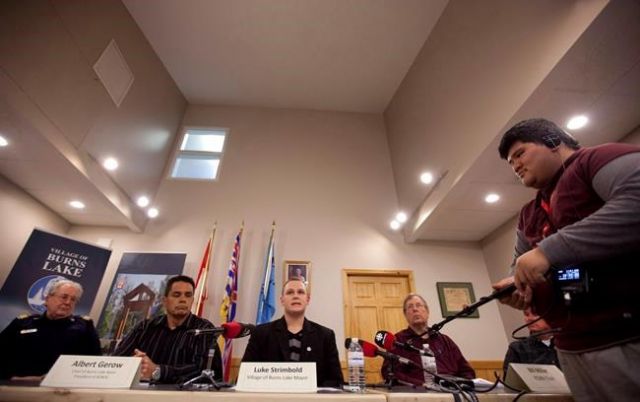 Photo: The Canadian Press
Luke Strimbold, Mayor of the Village of Burns Lake, addresses the media during a news conference as he responds to the explosion at Babine Forest Products mill in Burns Lake, B.C. Saturday, Jan. 21, 2012. An Indigenous leader in central British Columbia says his community is angry and disheartened after its former mayor was charged with sex-related offences. THE CANADIAN PRESS/Jonathan Hayward

An Indigenous leader in central British Columbia says his community is angry and disheartened after its former mayor was charged with sex-related offences.

Chief Wilf Adam of the Lake Babine Nation says he also has questions about the length of time it took the RCMP to reveal that Luke Strimbold, the former mayor of nearby Burns Lake, had been charged with numerous counts of sexual assault and related offences.

Court records show Strimbold, 28, was arrested and released on Feb. 3, but news about the case didn't emerge until last week.

Adam said he first heard about the charges as he got off a plane and his phone was flooded with messages.

"When I first heard about it, I was very, very upset," said Adam, who noted that he had a close working relationship with Strimbold.

RCMP issued a statement Friday about the charges they say relate to "allegations that occurred in 2016."

Police have refused to say how many charges Strimbold is facing or what the "related offences" are, but Mounties are investigating the possibility there are more complainants.

Strimbold did not immediately respond to requests for comment.

The news has been difficult for the tight-knit community and people want to know why it took so long for the information to emerge, Adam said.

"It's disheartening to hear this. Why were we left out of the whole process when the charges did come down?"

Adam said he met with RCMP in Burns Lake on Monday and was told the nature of the case and that a publication ban prevented investigators from releasing any details earlier.

Court records show the ban prevents any identifying information about complainants or witnesses from being published.

In 2011, when Strimbold was first voted in at the age of 21, he became the youngest mayor ever to be elected in the province.

He led the community through a deadly explosion at a sawmill in 2012 that killed two men and injured 19 others.

In 2013, he was awarded the Queen's Diamond Jubilee Medal for community service and, in 2014, BCBusiness magazine named Strimbold one of the Top 30 leaders under the age of 30, recognizing his efforts to successfully rebuild the local economy.

The young mayor worked closely with First Nations in the area on a variety of issues and helped out at a camp that Lake Babine put on about five years ago, Adam said.

"He's a very trustworthy person. And he's willing to help out as much as he can with anything that you ask of him."

Strimbold was re-elected in 2014, but resigned in September 2016, saying he wanted to further his education and spend more time with his family.

Adam said the mayor quit "very abruptly" and they haven't spoken since.

Strimbold also served as membership chair for the B.C. Liberals. Party officials said they became aware of the charges against him on Friday and that Strimbold had resigned as both a member of the executive and as a member of the party.