Another state of emergency 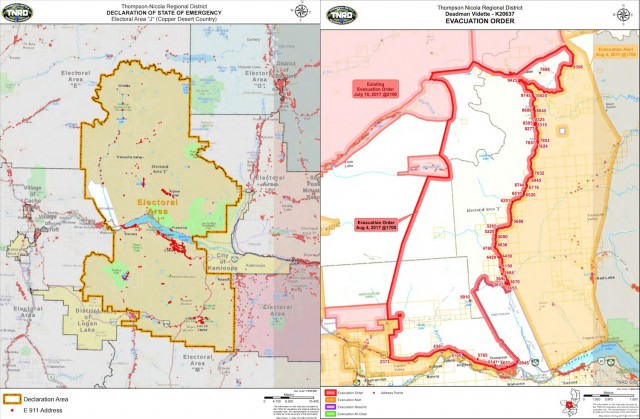 Photo: TNRD
More homes have been evacuated and a state of emergency has been declared due to the Elephant Hill wildfire.

As the 93,000-hectare Elephant Hill wildfire continues to burn out of control, more homes have been evacuated and another state of emergency has been declared.

The entire Electoral Area J, just west of Kamloops, has declared a state of emergency due to the fire that could “potentially result in severe impact on the local economy and the wellbeing of the community,” according to the declaration.

Additionally, dozens of properties in the Deadman Vidette area, northeast of Ashcroft and east of Loon Lake, have been evacuated.

A full list of evacuated properties can be found here.

Evacuees must travel to Kamloops, using Highway 1, and register at the Sandman Centre at 300 Lorne Street.

Additionally, those in the Tranquille Valley and Hat Creek areas have been put under an evacuation alert due to the blaze. The full list of those under the alert can be found here.

Over 600 personnel, including 466 firefighters, are battling the giant wildfire.