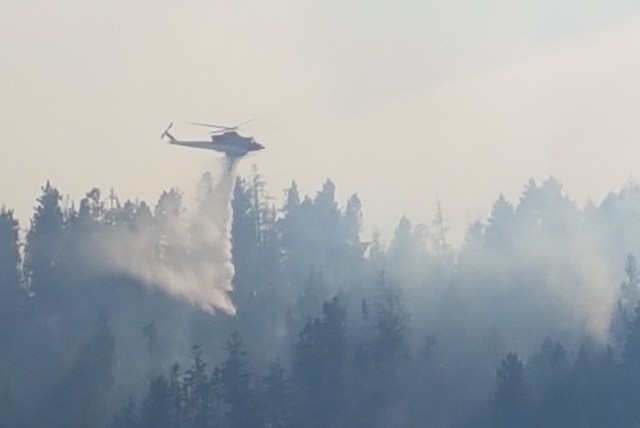 The BC Wildfire Service expects this weekend's “major wind event” to cause a “substantial increase in wildfire activity.”

Winds are expected to gust to 70 km/h in the Interior, which the BC Wildfire Service says could cause current fires to grow significantly, while lightning may start new blazes.

“Given the proximity of existing wildfires to communities, infrastructure and transportation corridors, people throughout the Cariboo region and the southern Interior should be prepared for potential evacuations.”

After calmer winds gave fire fighters a leg up on the fires burning across much of the province this week, heavy winds are still expected to kick up in the Interior today.

Environment Canada's weather alert for high winds remains in place, after it was first issued Friday.

The warning says those in the Okanagan and the Cariboo regions can expect 20 to 50 km/h winds, gusting to 70 km/h in some places.

The winds are expected in the Northern, Central and Southern Okanagan Saturday afternoon, moving north to the Cariboo Sunday morning.

Unfortunately for those affected by fires, the wind is not expected to bring any rain, other than north of the Cariboo region, but lightning may occur.

“Significant rain continues to elude the southern half of the province for the foreseeable future,” the alert states.

“According to the BC Wildfire Service, this forecast weather has the potential to challenge their efforts to contain the many large wildfires currently burning across southern B.C., and could cause growth on a number of these incidents.”

Growth in the wildfire burning near Ashcroft forced the evacuation of Loon Lake Friday evening, and put the Village of Clinton on evacuation alert.

The entire town of Williams Lake remains under an evacuation alert, as several wildfires burn nearby, and many resident have already left town.