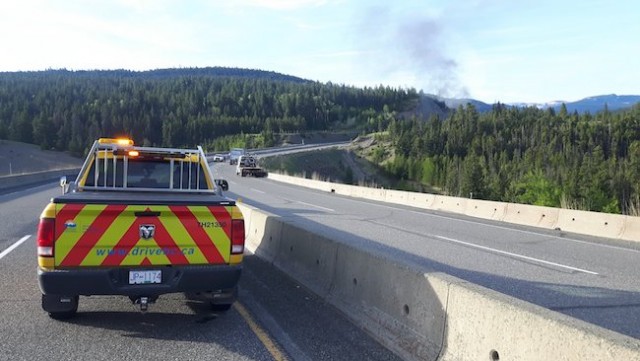 More than a day after traffic on a busy British Columbia highway was stopped by a fire that destroyed a truck hauling hazardous materials, vehicles were allowed past the scene on Tuesday.

Northbound traffic on the Coquihalla Highway, 25 kilometres south of Merritt, was allowed by the accident site at about 6 a.m. and southbound traffic began flowing 90 minutes later.

The DriveBC website says crews needed the additional time to clear away the charred remains of the truck, which burst into flames early Monday, sending up clouds of potentially toxic smoke.

Interior Health issued an advisory warning anyone near the scene to immediately take shelter and close windows and doors if they smelled something odd.

The Ministry of Transportation confirmed chemicals used for pool maintenance were involved in the fire, and it says crews had to work with a hazardous materials team to contain the situation.

The closure of the highway created long lines for Victoria Day travellers heading back to the Lower Mainland from Interior destinations, although several detours were available.

DriveBC says southbound lanes on the Coquihalla Highway reopened at 7:30 this morning.

There will, however, be a lane closure in effect until further notice.

Alternate routes are available via highways 1 and 8 (Merritt) or 3 and 97 (Kelowna) with an alternate route via Highway 1 (Kamloops).

Cleanup in the southbound lanes continues, and the highway is expected to fully reopen by 8 a.m.

The Coquihalla Highway will remain closed and there is no estimated time of reopening.

DriveBC said at 10:45 p.m. there is no estimated time of opening as assessment is ongoing.

Hazardous material cleanup is still taking place and is expected to last overnight.

The next update is expected at 6 a.m.

It is expected the Coquihalla Highway will remain closed in both directions until midnight.

In a tweet, VSA Highway Maintenance wrote that a haz-mat assessment has been completed, and cleanup is now underway. Interior Health has issued an air quality advisory for the surrounding area.

Alternate routes to and from the Lower Mainland are available via the Fraser Canyon or Hope to Princeton Highway.

VSA Highway Maintenance has provided a brief update, stating that a haz-mat team is now on site.

There is still no estimated time of reopening. The next update is expected at 3 p.m.

The Coquihalla Highway is closed 25 km south of Merritt due to a transport truck fire.

The highway has been closed since at least 4 a.m., and there is no word yet on when the road will reopen.

DriveBC is recommending motorists take the Fraser Canyon or Hope to Princeton Highway in the interim.

Castanet will update with more information as it becomes available.