Chiefs: 'Anyone but Clark' 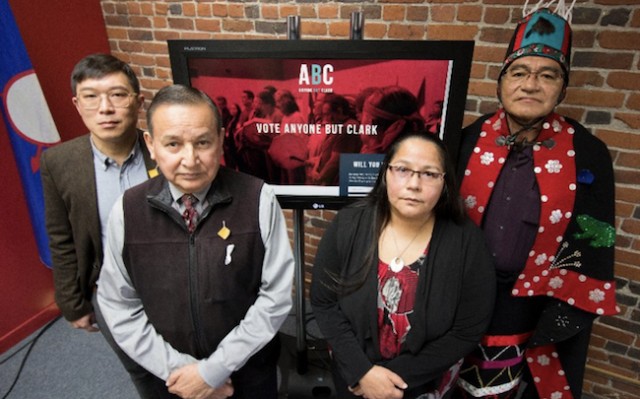 The Union of B.C. Indian Chiefs is voting ABC on May 9 – anyone but Clark.

A third term for the BC Liberals would be "disastrous for indigenous and non-indigenous peoples across the province. Now is the time to stand up for B.C. and vote for Anyone But Clark," the chiefs said Monday at a press conference in Vancouver.

Penticton's Grand Chief Stewart Phillip, president of the UBCIC, said: “The LNG pipedream is market-dead.... A false economy based on outdated concepts of destroying the land and piping wealth to foreign companies for minimal returns and temporary highly transient jobs no longer holds water.”

The Liberal "fantasy" has failed to respect the title and rights of indigenous nations, the UBCIC says.

“Christy Clark and the BC Liberals have had six years to ravage B.C. in a misguided attempt to appease foreign corporate interests,” said Chief Bob Chamberlin, vice-president of the union.

The chiefs allege the Site C dam is an "archaic and unnecessary project being built by out-of-province workers, arrogantly being pushed to the point of no return, while sacrificing some of the most promising agricultural land in the province and destroying the traditional territory of Treaty 8 First Nations."

That $8 billion could have been spent on affordable housing, transit solutions, or to prevent thousands of deaths claimed by the fentanyl crisis, the chiefs say.