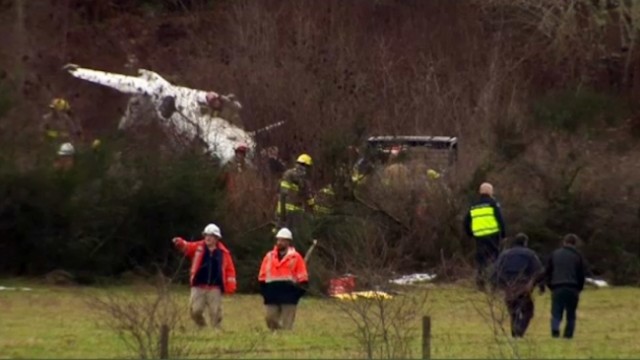 An instructor and a student have survived a small plane crash just north of the airport in Duncan.

Bill Yearwood with the Transportation Safety Board says the Cessna 172 from the Victoria Flying Club clipped some power lines and crashed in a farmer's field on Thursday afternoon.

Yearwood says live power lines near the crash site hampered the rescue efforts, but both people in the plane are alive and were able to speak to rescuers before the power was shut off.

First responders were able to remove the female pilot from the downed aircraft and she was airlifted to hospital with unknown injuries, while the male student was treated at the site.

Yearwood says it's still unclear if the plane was taking off or if it missed the approach to the airport.

He says the board is assessing the crash and will likely send investigators to the scene of the crash.

The Transportation Safety Board confirms two people were on board a Cessna 172 that crashed near Duncan Airport.

A pilot and an instructor from the Victoria Flying Club were on board when it went down in a field after hitting power lines, TSB spokesman Bill Yearwood told CTV.

One occupant was able to get out out of the aircraft without assistance, but the other was trapped inside, but alive.

A small plane has crashed near Duncan Airport after striking power lines.

Fire crews are responding to the crash scene, just north of the airport, CTV reports.

Details are few, but businesses in the area say a small plane struck high-voltage lines and went down.

BC Hydro confirmed its lines were struck, causing a brief power outage in the area.

The severity of the crash and condition of the pilot is not yet known.

The Transportation Safety Board is looking into the incident.