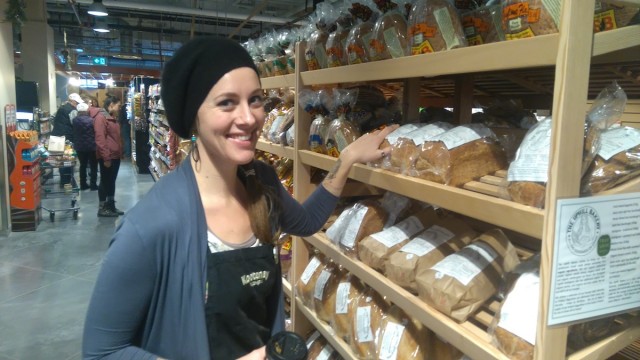 It’s not often a customer will get teary-eyed over a grocery store.

But Pam Kristen welled up as she surveyed the Kootenay Co-op’s new Nelson store, which opened Wednesday in the city.

“It’s fabulous, it’s really touching that it’s come so far. I remember when they had dry goods at the back of Gerick’s Bicycle,” said Kristen, a 20-year member of the co-op. “I’m just so happy for all these people who have worked so hard.”

The co-op certainly has come a long way from the back of a bicycle shop. Starting as a coalition of several small local buying clubs in the 1970s, it now boasts 14,000 members in a town of 10,000, making it the largest consumer-owned natural foods co-op in North America.

The new building, in a prime location in downtown Nelson, triples the size of the co-op, and was long needed, says Jaime Frederichs, the co-op’s marketing manager.

“If you shopped at our old store, you realized how tight and uncomfortable it had become. And it was like that 10 years ago,” he says. “It’s taken the better part of a decade to realize this vision of having a larger and more effective space for our cooperative to grow into the future.”

The project, which cost $35 million in total, also sees the co-op become landlord to an upscale 54-unit condominium apartment block, including three units made available as affordable housing, and space for eight other storefront businesses.

“I’ve think we moved to the next level as a co-op, that we’ve opened the door for the next 20 years,”  says general manager Allan Broom. “We’ve been driven by the community and now we have the opportunity to serve the community even better.”

There’s certainly more room for products and specialty goods in the store, which had $14 million in sales annually before the move. It’s added a deli restaurant and hired 40 new staff, making it one of the largest employers in Nelson.

The success of the co-op has been a boon to local growers as well. Friederich says the coop sources from nearly 140 local growers, putting about $2 million into local farmer’s pockets.

But it was one thing in particular that will bring Pam Kristen back.