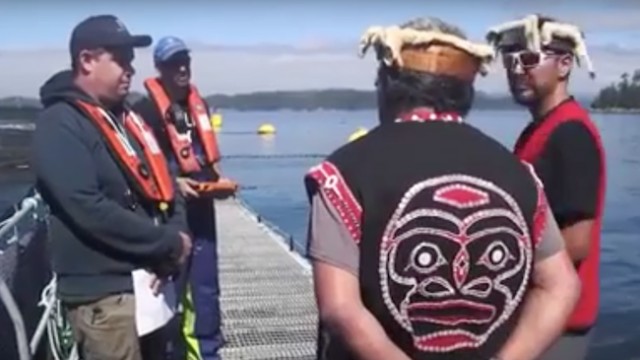 Leaders of a B.C. First Nation and a biologist have responded to a lawsuit alleging trespassing on a salmon farm.

At issue is First Nation trespass on a salmon farm within the Dzawada’enuxw territory.

On Aug. 23, the Dzawada’enuxw leaders and dozens of others from neighbouring tribes entered a Marine Harvest salmon farm to serve the company an eviction notice and to perform ceremony to begin cleansing their waters of the filth and impact of the salmon farming industry, according to the Union of B.C. Indian Chiefs.

The UBCIC is calling the lawsuit a SLAPP-suit, or a strategic lawsuit against public participation.A SLAPP-suit refers to a frivolous claim using legal costs to try to deter lawful public protest.

Over the past 29 years, the Dzawada’enuxw have repeatedly told the government that they do not want salmon farms in their territory.

But the UBCIC says one-third of the B.C. salmon farming industry is currently using Dzawada’enuxw territory to raise Atlantic salmon.

By joining the case, Dzawada’enuxw hopes Marine Harvest will have to defend their licences and their activities.

The chiefs claim in the litigation that Marine Harvest has no sufficient legal right to exclude them in the use and/or occupancy of the Dzawada’enuxw Territory, nor their invited guests, that the ceremony held was a lawful exercise of traditional ceremony and in the public interest.

Research published by Morton and others reports sustained impact of salmon farms on Dzawada’enuwx fisheries, with a loss of 29% of young wild salmon in 2015 due to sea lice from salmon farms.

“Government is allowing the salmon farming industry to destroy wild fish stocks in Dzawada’enuxw territory,” said Morton in a news release. “They don’t want this for their future generations.”