Favourable wind conditions this afternoon have helped firefighters achieve 30 per cent containment on the 500-hectare wildfire near Lytton.

“Crews continue to establish containment lines in areas of new growth with the help of heavy equipment. Firefighters are conducting burn-out operations to eliminate pockets of fuel near control lines.”

The BC Wildfire Service says the fire continues to burn away from structures, and sprinkler protection units have been mobilized on properties in the area.

“Crews are suppressing the southern flank, closest to critical infrastructure and the community of Lytton,” says Birkner.

Northern portions of the fire remain in modified response, which means wildfire officials are closely monitoring this area where human and natural resource values are not a risk.

“Trigger points have been established where greater risks may develop, and if the fire begins to approach these points, resources will be allocated to manage the fire,” adds Birkner.

Smoke will continue to be visible to surrounding communities throughout the evening.

The BC Wildfire Service reminds all the public driving within the area of fire operations to please use caution as visibility may be impacted.

The fire was sparked Wednesday near the CN works yard and its rapid growth prompted evacuation orders for properties on the west side of the river.

The cause of the fire is still under investigation, but is believed to be human caused.

Weather is still a major factor in the fight against a 500-hectare wildfire south of Lytton.

The BC Wildfire Service says the fire did grow overnight due to strong winds in the area, but has decreased in intensity since.

“Currently the fire conditions have decreased to Rank 1 and Rank 2 fire behaviour, but with temperatures rising and wind picking up this afternoon, it is likely to see some flare ups. Smoke and flame will continue to be visible from surrounding areas,” writes the BC Wildfire Service.

There is no current containment on the active blaze.

The fire was sparked Wednesday near the CN works yard and its rapid growth prompted evacuation orders for properties on the west side of the river.

“Structural Protection Units are on site of the South Spencer Road wildfire,” adds the BC Wildfire Service.

“Sprinklers and protection kits are being placed near homes within the evacuation area. At this time the fire is moving away from structures.”

The area of the evacuation alert has been expanded to include the entire area between the CN Rail train bridge in Lytton north to the Stein River.

The cause of the fire is still under investigation, but is believed to be human caused.

The BC Wildfire Service says it is bracing for strong winds and flareups as it battles an aggressive blaze near Lytton.

A new estimate released today says the fire has burned five square kilometres of bush and timber on the west side of the Fraser River, directly across from the community.

The fire was sparked Wednesday near the CN works yard and its rapid growth prompted evacuation orders for 16 properties on the west side of the river.

The Thompson-Nicola Regional District has placed 20 other properties north of the blaze on evacuation alert as winds of up to 60 kilometres per hour are forecast to buffet the area.

"We will expect to see some flareups later in the day," he says.

The wildfire service says one outbuilding has been lost and the fire remains uncontained.

Strong winds are anticipated for the region again today, with temperatures reaching 23 C.

The fire is zero per cent contained and is displaying rank 1 and rank 2 behaviour. BC Wildfire information officer Max Birkner says the possibility of flare-ups are likely.

There is currently an evacuation order and alert in place for several homes in the area. The area of the evacuation alert has been expanded to include the entire area between the CN train bridge in Lytton north to the Stein River.

The BC Wildfire Service is now reporting the blaze near Lytton has grown to 500 hectares. Evacuation orders and alerts remain in place.

A wildfire burning along the Fraser River, just west of Lytton, has been fanned by strong winds and continues to threaten dozens of homes.

The South Spencer Road wildfire broke out Wednesday on the west side of the river.

Within hours, it had grown from a 12-hectare brush fire to blacken four square kilometres of bush and timber.

The Thompson-Nicola Regional District has ordered the evacuation of 16 homes, all on the west side of the river, and an evacuation alert covers homes and properties as far north as the mouth of the Stein River.

A crew of 16 kept watch over the aggressive fire Wednesday night as it was pushed by strong winds that are forecast to gust up to 60 kilometres per hour today.

More houses have been put on evacuation alert by the Thompson-Nicola Regional District.

All properties on South Spencer Road north of Papyum 27 IR north to the southern boundary of Styren IR 9 and Lytton IR 9B are being notified of a potential evacuation.

For more information and a map of the evacuation area, go to the district's website.

The district offers a to-do list if your residence has been put on alert:

If your residence is given an evacuation order, you are to report to the reception centre, which has been established at the Lytton Parish Hall at 140 7th Street, Lytton, B.C.

All residents that have been evacuated must register with Emergency Social Services at the designated reception centre.

Registration provides emergency personnel and family members with a list of evacuees and will provide evacuated residents with food, shelter and other personal necessities

A new evacuation order has been served by the Thompson-Nicola Regional District.

People in that area are being told to leave immediately, and report to the Emergency Social Services Reception Centre at the Lytton Parish Hall, located at 140 7th Street in Lytton.

The district also suggested that evacuees turn off the power and propane to their residences.

The wildfire near Lytton has nearly doubled in size in the last hour.

The BC Wildfire Service now estimates the size of the fire to be 300 hectares in size.

Helicopters will also discontinue their service overnight, but will return with support from the air in the morning.

While the fire has doubled in size, it's spread has continued up the slope, and away from buildings.

The BC Wildfire Service is now estimating the size of the Lytton wildfire to be 160 hectares in size.

Currently, 56 firefighters are fighting the blaze, along side two water-delivery trucks and three helicopters.

The fire continues to exhibit Rank 3 to 4 behaviour, meaning there has been some candling of trees, as well as moderate spotting – where embers fly from one tree that is on fire, and travel to others around it.

Due to the fire's aggressive behaviour, fuelled by strong winds, the service cannot provide a sure percentage on containment.

Winds are expected to gust between 50 km/h to 70 km/h this evening, according to the service, which will cause firefighters more difficulty in battling the blaze through the night.

The fire continues to be travelling up the slope, and away from structures at this time.

BC Wildfire Management is now estimating the blaze near Lytton to be 100 hectares in size.

"We are seeing aggressive fire behaviour," says Erin Catherall, a fire information officer with the BC Wildfire Service.

"Currently the fire is burning up slope, away from structures," she says.

Winds are gusting up to 50 km/h and are expected to continue into the night.

Catherall says the fire about two kilometres south of Lytton is now 25 per cent contained.

Nine homes are on evacuation order by the Lytton First Nation and five homes are on alert in the Thompson Nicola Regional District.

The South Spencer Road fire 2 km south of Lytton is reported to have grown from 12 hectares to an estimated 60 hectares.

BC Hydro has disconnected power to 13 customers in the affected area. An evacuation order is in place for 16 homes, while another 20 remain on an evacuation alert.

The wildfire south of Lytton has spread rapidly Wednesday and poses an “imminent threat to people and property” in the area, according to the Thompson-Nicola Regional District.

Sixteen homes within the Lytton First Nations have been evacuated, and additional homes are on an evacuation alert.

The regional district has asked anyone on an alert to prepare to evacuate at a moments notice.

For those forced to evacuate, a reception centre will be established at the Lytton Parish Hall at 140 7th Street, in Lytton.

All evacuees must register with Emergency Social Services at the reception centre. Registration provides evacuees with food and shelter.

An evacuation order is in effect just south of Lytton due to a 17-hectare wildfire.

The aggressive fire is about two kilometres south of Lytton and has forced the evacuation of 16 homes within the Lytton First Nations.

About 20 additional homes are also on evacuation alert.

The BC Wildfire Service says the fire is showing Rank 3 fire behaviour which is a fire with moderate rate of spread and some candling.

“This aggressive fire behaviour is partially due to the strong winds in the valley,” notes the BC Wildfire Service.

A total of 44 firefighters, three helicopters and four air tankers are battling the blaze. 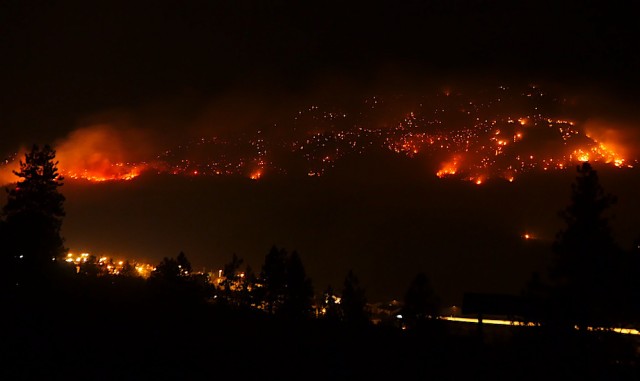