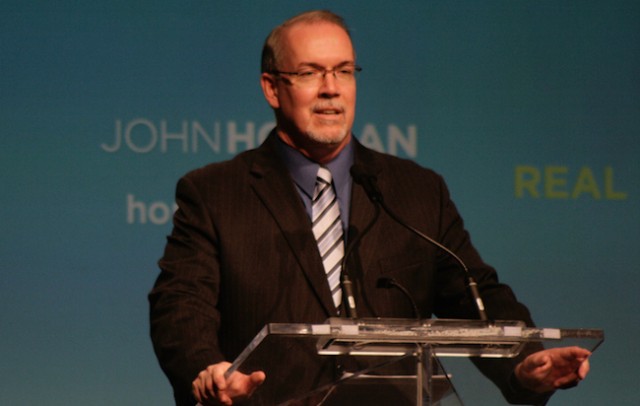 British Columbia's NDP leader is promising to partner with cities on transit, housing and mental health if he becomes the province's next premier.

John Horgan spoke to hundreds of local politicians from across the province gathered at the annual Union of B.C. Municipalities conference in Vancouver.

He told the crowd the New Democrats would not have handed the problem of transit off to local politicians, like the current Liberal government did in the recent Metro Vancouver transit plebiscite.

Horgan also criticized the province for selling off public land in Coquitlam on Burke Mountain, which he said sold for more than $40 million under the appraised value.

He pledged to work with cities to build affordable housing and find solutions to addiction and mental health, applauding the City of Victoria's plan to borrow $50 million from various levels of government to tackle homelessness.

In response, Energy and Mines Minister Bill Bennett told reporters that his government isn't perfect but is the best fiscal manager in the country, with plans for a liquefied natural gas industry and the $9-billion Site C dam.