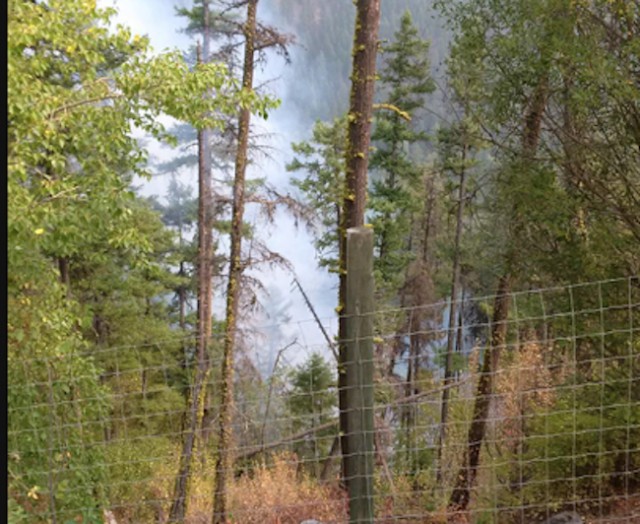 Fire officials in Kamloops now say the cause of a smoldering grass fire near Princeton Avenue above Peachland is under investigation.

The fire was originally described as being lightning caused however, fire information officer Melissa Klassen says the cause is now being investigated.

Lightning was reported in the area Aug. 14.

Two new wildfires have sparked this morning – one in the hills above Peachland, the other off Chute Lake Road.

Meanwhile, five new fires were sparked in the Kamloops Fire Centre during the last 24 hours and all but one are suspected to be human caused.

Fire information officer Melissa Klassen says all the fires were small, and crews were able to make quick work of them.

"All of these fires are believed or suspect to be human caused as of right now and all of them did remain small,” says Klassen.

Two of the fires were in the Vernon fire zone, one north of Swan Lake near Highway 97A, and the other in the Beaver Lake area.

“For the Beaver Lake fire, we did have four crews respond, so 12 personnel, we also had three helicopters respond as well, bucketing the fire,” says Klassen. “We did have one structure that was within the vicinity of the fire, however it was not threatened by the fire given it was on the other side of the lake.”

The fire north of Swan Lake was a spot fire that was brought quickly under control.

There was one in the Penticton fire zone, a smaller blaze ignited by a car fire on Highway 97C.

And two more this morning in the Kelowna fire zone, one off Chute Lake Road and one in Peachland.

As for the Peachland fire, Klassen says it is in a remote area along Princeton Avenue in the hills above Peachland, and is suspected to be the only one that is lightning caused.

The largest of the new fires, it is estimated to be three hectares in size and crews are requesting air tanker support as visibility is reported to be better today.

“We are sending two initial attack crews,” says Klassen. “It is suspected to be lightning caused, but not from any recent lightning activity, so potentially from some hold-over lightning.”

One of the crews will rappel in, while the other will go in from the ground. A helicopter is also responding.

Castanet News will have more details on this fire as information comes in.