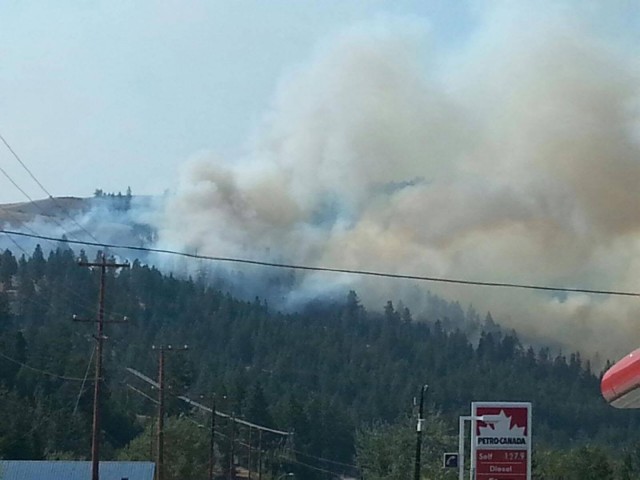 Evacuees of the Rock Creek wildfire have begun to pour into the Emergency Social Services reception centre tonight as the fire continues to grow rapidly.

The fire is now estimated to be 750 hectares in size, and is expected to continue to grow steadily throughout the night, according to Fanny Bernard, fire information officer.

Approximately 240 homes are in the evacuation area, and some who have already been evacuated fear their homes are already lost.

“It’s burning, I heard 11 (homes) were gone, and I’m pretty sure mine’s one of them,” said Don, a resident of Westbridge.

Bernard could not confirm that any structures have been lost yet.

The 200 campers at the Kettle Creek Provincial Campground were fully evacuated as well. The entire campground has reportedly been burned.

“We lost our tent trailer, three brand new tents, all of our clothes,” said Dax Chatwell, who was at the end of a weeklong camping trip from Calgary. “There’s actually a couple ladies inside (the reception centre) that lost their houses.”

There are currently 36 BC Forest Service personnel fighting the fire, along with air support and the Midway Fire Department. There are 40 more Forestry personnel on their way to assist.

Crews will be working throughout the night to protect buildings and assist with further evacuations.

One resident of Zamora, who wished to remain anonymous, said he had been talking to his son earlier who was at their house tonight.

“He grabbed the wife, two goats and our dogs and took off. They stopped him a mile down the road towards Westbridge and he said he could see the black smoke and it looked like our house was burning. What do you do?”