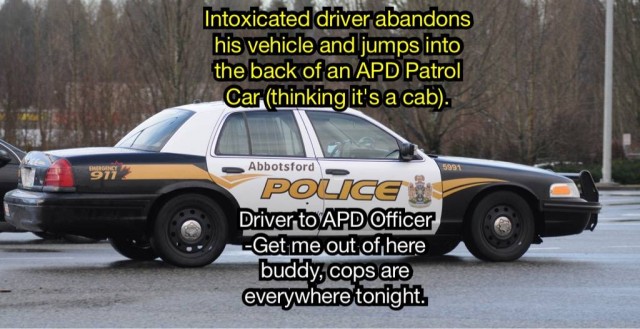 A drunk driver in Abbotsford is getting no sympathy for a belated decision to pocket his car keys and grab a cab.

Abbotsford Police say the suspect pulled his vehicle over beside what he thought was a taxi, jumped in and muttered: "Get me outta here, buddy. Cops are everywhere tonight."

Turns out the taxi was actually an idling police car, and the officer wasted no time in taking the man directly to jail.

In a tweet, Abbotsford Police put the man's gaffe at the top of their latest list of excuses heard by officers handing out tickets in the Fraser Valley jurisdiction.

Other favourites on the list include the driver who admitted to speeding because of bothersome hemorrhoids, prompting the officer's tongue-in-cheek apology for making the motorist sit even longer.

The often hilarious list of bad-driver excuses was viewed 16,000 times by Tuesday, when it was posted on Twitter as part of the Abbotsford Police Department's bid to raise road safety awareness.