A heavy blanket of stagnant grey haze has settled over the Lower Mainland as winds push smoke south.

Air quality advisories have been issued for Metro Vancouver, the east and south coasts of Vancouver Island, the Sunshine Coast, Sea-to-Sky corridor and the Fraser Valley.

The smoke is so thick over Vancouver, residents report ash lining their vehicles, parks and homes, while some are having difficulty breathing. Others report burning eyes and sore throats.

An air quality advisory was issued Sunday afternoon and will likely extend to the Fraser Valley today as wind carries fine particulates eastward.

In the photo below, a NASA satellite image captures the extent of smoke over the region. The image on the left shows clear skies on July 4 versus thick smoke on July 5.

People with chronic medical conditions, as well as the elderly, are advised to avoid exercising outside until the advisory is lifted. Residents are also being asked to stay inside and in air-conditioned rooms when possible.

While conditions vary, air quality worsened overnight, and is now sitting at an eight out of 10, according to Roger Quan, director of air quality and environment for Metro Vancouver.

The air quality advisory is expected to remain in effect until the weather changes.

The provincial government has also imposed a provincewide ban on open burning as an unrelenting heat wave that began in early June sends temperatures soaring to record highs.

– with files from CTV Vancouver and The Canadian Press 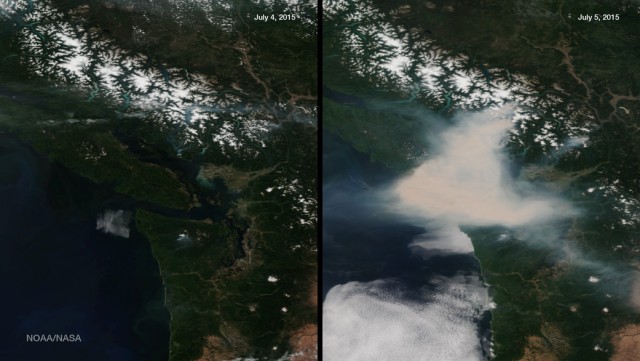