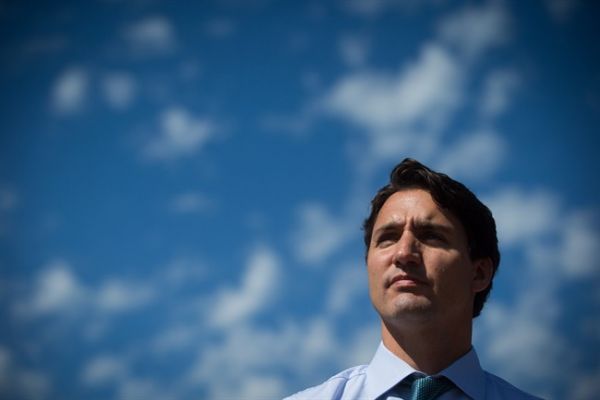 Trudeau pledged on Monday to "put some teeth" back into the National Energy Board as one of the Liberals' top priorities if he unseats Prime Minister Stephen Harper in October.

The board, which regulates construction and operation of oil pipelines as part of its mandate, has been criticized for whittling down public input while reviewing some projects after the Conservative government amended its act in 2012.

Trudeau said the Liberals would overhaul the NEB assessment process to include more consultation with aboriginal groups and increased analysis of greenhouse gas emissions for proposed projects such as new pipelines.

"This government has chosen to be a cheerleader instead of a referee on issues like this," Trudeau told reporters while standing before a backdrop of the ocean and ships at Jericho Beach.

"Everyone here in B.C. knows the Great Bear Rainforest is not a place for an oil pipeline," he said of the name given by environmentalists to a 6.4-million-hectare area stretching along the coast north of Vancouver Island.

"If Mr. Harper had actually listened or understood B.C. in the slightest, he would have said that from the get-go and saved an awful lot of people a lot of time, a lot of effort and a lot of money," he said of all sides involved in the controversial project.

Groups including ForestEthics Advocacy called some of Trudeau's proposals a "good first step," but argued the NEB process would still need to be beefed up further.

"Any new assessment must include an explicit climate test, along the lines of what President (Barack) Obama included in the Keystone XL process," said Karen Mahon, the group's director.

ForestEthics also lauded the Liberals' proposal to formalize a tanker ban in northern British Columbia as the "final nail in the coffin" for the Northern Gateway pipeline.

However, Greenpeace Canada said it was disappointed in a platform it dubbed "too weak, vague."

But the group joined the Pembina Institute in welcoming Trudeau's commitments to including upstream carbon emissions in his proposed amendments to the environmental review process.

At least one industry group, the Canadian Electricity Association, said it was pleased with the Liberal platform.

Association president Sergio Marchi said he was "heartened" that Trudeau picked up on policy suggestions the group sent to all the federal parties.

"Full marks for listening and acting," said Marchi, who is a former Liberal cabinet minister.

A spokesman for Enbridge said the company is committed to protecting the province's natural environment.

"We know that safe shipping is of the utmost importance to our province's coastal communities," Ivan Giesbrecht said in a statement, adding that Enbridge is meeting conditions set by the National Energy Board and federal and B.C. governments.

He said "the independent examination of the Northern Gateway Project was based on sound science and fact, and is the most thorough and comprehensive in Canadian history."

The Conservative party criticized Trudeau's platform, saying he "does not understand" the implications of some of his policies, though it did not mention Trudeau's plan to revamp the environmental review process.

The New Democrats said the Liberal leader's announcement contained "few details" but borrowed plenty of policies from its own platform.