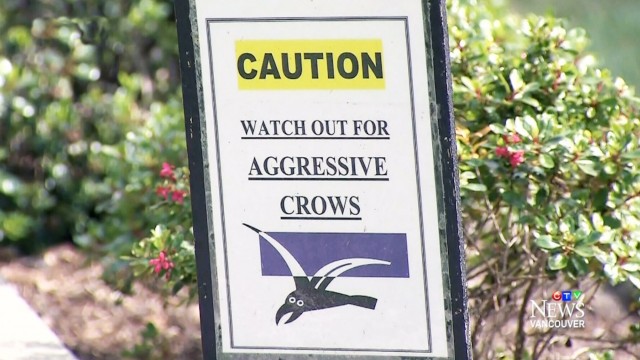 After facing an onslaught of recent crow attacks, residents of Cloverdale, B.C., may feel as though they're characters in Alfred Hitchcock's famous 1963 thriller "The Birds."

Several signs have popped up outside a busy shopping mall in the town telling citizens to "beware of crows."

Tricia Lawrence, who is employed at a nearby pub, said she has fallen victim to attacks from the cunning animals on the way to work.

Several signs have popped up outside a busy shopping mall in Cloverdale, B.C., telling citizens to "beware of crows."

"(The) first couple of times they dive-bombed me," Lawrence told CTV Vancouver.

She added that only way to deal with assaults is to "run, just run."

Two other shoppers said they also had run-ins with the birds.

"This crow came at this person and … we all screamed," said one woman.

"I just felt something on my head. 'Ouch,'" said another shopper.

The aggressive behaviour likely occurs because, at this time of year, adult crows are protective of their fledglings, which haven't learned to fly yet.

"They're on the ground, they're learning how to fly for a certain period of time -- sometimes up to two weeks -- and parents, aunts, uncles, cousins, siblings, everyone will defend the babies," said Janelle VanderBeek, a co-ordinator at the Wildlife Rescue Association of B.C.

VanderBeek added that even before the fledglings have hatched, adult crows can be "very defensive" of the area surrounding the nest.

To thwart off attacks, VanderBeek recommends using an umbrella for protection and posting signs to warn others.

"Crows are very intelligent and can recognize faces, so if you have an umbrella in front of you they can't see your face," said VanderBeek.

And the behaviour isn't expected to tail off anytime soon. Baby season lasts till August.