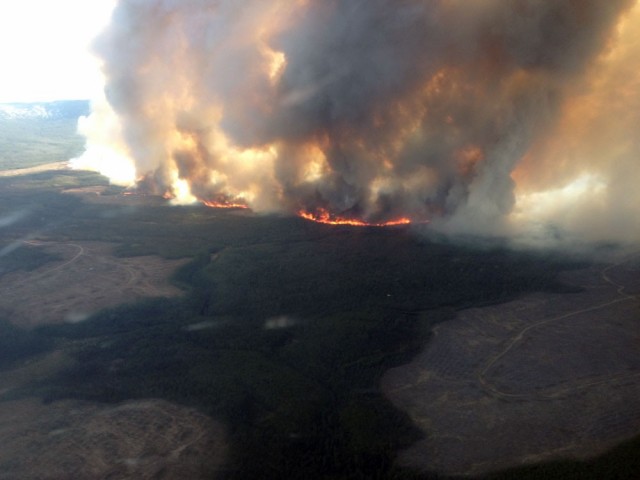 British Columbia's premier is calling a wildfire that has already scorched more than 130 square kilometres in the central Interior "alarming," and is warning residents of a "bad forest fire season" ahead.

Christy Clark was in Prince George Friday to get an update on the Little Bobtail Lake fire, which was reported May 9.

By the afternoon, the Wildfire Management Branch was reporting that nearly 200 people, eight helicopters, 22 pieces of equipment and eight tankers were battling the blaze that had forced municipalities to issues evacuation orders and alerts that residents may have to leave at any moment.

"There has not been a fire this big, this early in the year since 1983, and this fire's bigger," said Clark. She called the fire "alarming" and said it was likely caused by humans.

Clark said the province experienced a dry winter and is expected to see a dry summer. She also noted the abundance of trees killed by pine beetles in the forests.

"The bad end of that is that we're going to have probably a very bad forest fire season," she said. "So people need to be really, really careful this year."

Bill Miller, chairman of the Regional District of Bulkley-Nechako, said local officials have placed about 700 to 800 residences west of Prince George under evacuation alert.

He said about 60 residences were placed under evacuation order, although most of those are seasonal homes.

The neighbouring Regional District of Fraser-Fort George issued evacuation orders to about 130 people last Sunday night and evacuation alerts to about 122 properties the next day, said information officer Renee McCloskey.

"You can see the smoke from town," she said from Prince George.

McCloskey said fire officials may upgrade the evacuation alerts to orders and they are preparing group accommodations.

"We do know that fires cost hundreds of millions of dollars," said Clark.

"It was $300 million dollars we spent last year putting out fires. If we keep on this track, it's going to be more this year. And, you know, British Columbians aren't giving us more money."

The Wildfire Management Branch was also reporting that two other "wildfires of note" had burned 250 and 83 hectares near Quesnel and Clearwater, respectively.

The Forests Ministry said small campfires are currently permitted throughout B.C., with the maximum allowable size of 0.5 metres wide by 0.5 metres high.

Almost half of all wildfires in the province are caused by people, and the Wildfire Management Branch said resources are unnecessarily tied up to deal with them.

Clark said people won't want to see another blaze like the Little Bobtail Lake fire and she urged everybody to be careful in the forests.

Note to readers: This is a corrected version. A previous story located evacuees east of Prince George.