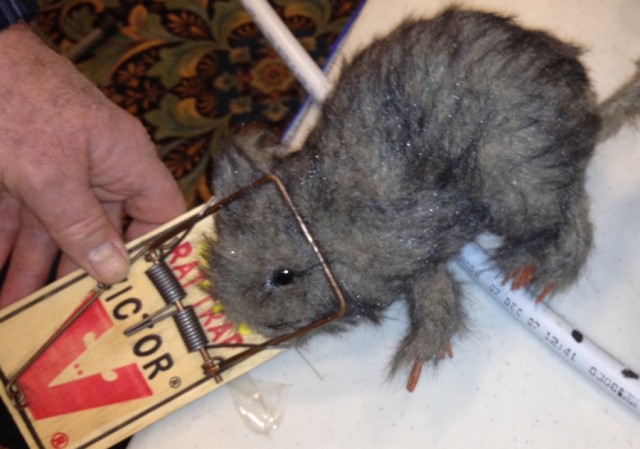 Since he started up his pest control company six years ago, Steve Ball has seen a definite increase in the number of rats in the Okanagan.

Initially, it was a rarity to catch one of the rodents. Now, he gets calls on a daily basis from concerned residents.

"The first year, I don't think we caught more than one or two in the whole Okanagan. At that point, it was big news if someone caught a rat," he said. "Then, about three years ago, the population started to grow and has steadily increased."

That increase means his Kelowna-based company, BugMaster Pest Control, is now catching anywhere from 400 to 500 rats a year.

The types most commonly found are black or roof rats and Norwegian rats, and it's not uncommon these days to take six to eight rats out of a single dwelling.

Ball attributes the growth to closing the landfill in West Kelowna, which meant the population exploded into nearby houses, and just the growth of the Okanagan itself.

"I think as the population grows in the Okanagan Valley, more rats are being introduced," he said.

Other reasons are there isn't as much rat-proofing here as there is in other provinces. Once two rats get in, that can easily turn to 200.

The problem appears to be widespread, with West Kelowna and Summerland getting worse, as well as rats being found in Penticton, Oliver and Osoyoos.

Mobile home parks can be afflicted because once they are taken from one home they can easily move to the next.

"About the only area we are not catching lots is Vernon beause they haven't migrated that far north yet," said Ball.

Of concern are the pathogens in rats' urine and droppings, which can cause disease. They can cause structural damage to homes.

"Rats need water to survive, so they chew through water lines and can cause a lot of damage. They are just nasty little creatures," he said.

To deal with the problem, exterminators set out traps and frequently change the bait. Poison is not used because if a cat or bird eats a poisoned rat, it can have a ripple effect.

Home owners can play a role by rat-proofing with screen meshing and expandable foam, watching for droppings and practising door awareness.

"Believe it or not, 70 to 80 per cent of rats come right through the door," said Ball. "So people should watch for that."

Ball said he would like to see more of an effort to deal with the growth, like what is being done in Vancouver with the Vancouver Rat Project.

"I believe local governments are not taking this seriously," he said. "They maintain there are isolated areas, but we are finding rats everywhere. There needs to be a communal effort to control this increase in the population or it will just get worse."

Zoe Kirk, the RDOS WildSafeBC community co-ordinator, said rat pockets have been discussed at the board table.

"Public works staff have been tasked to research the viability of implementing a regional program to assist homeowners to deal with rodents; best practices, methods, post-mitigation strategies to reduce the risk of re-infestation and the like," she said.

There is already some information and links to more on the RDOS website: http://www.rdosmaps.bc.ca/min_bylaws/PublicWorks/WildSafeBC/LivingWithWildlifeInBC/Rodents.pdf