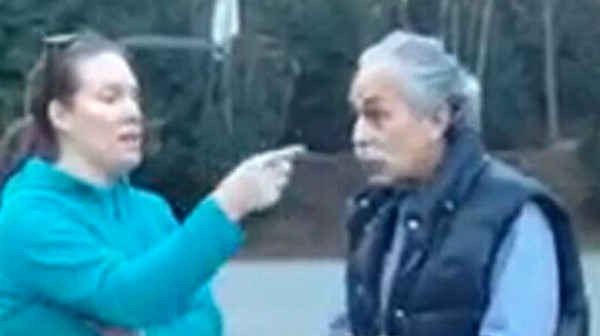 A North Vancouver mom is peeved that her kids were kicked off a private school playground she helped raise money to build.

Anne Fisher was with her children at the Cousteau French International School on Monday afternoon when a security guard asked them to leave.

She refused until the school’s principal, Gerard Martinez, came outside and engaged in a tense exchange that was filmed and uploaded to YouTube.

“My kids cannot play on the school playground that I raised money for,” Fisher can be heard saying in the footage.

“This is unacceptable. I cannot believe you have a security guard here. I can’t even tell you how upset this makes me feel.”

Martinez tells Fisher the school is responsible for the safety of its students, and that non-students are welcome on the playground after 5:30 p.m.

The property used to be home to Fromme Elementary, a public school that closed in 2010. The North Vancouver School District has been leasing the land to the French International School since.

Martinez defended the decision to keep local families off the grounds during the school day, noting that under his contract with the district he’s liable for student safety from 8 a.m. to 5:30 p.m.

“My job is to protect my children, that’s all. That’s what I tried to explain to her,” he said.

The principal said everyone is welcome to use the playground outside of those hours, and all day on weekends.

That’s little consolation to Fisher, who was among a number of families who raised thousands of dollars to build the playground for Fromme years before the French school moved in.

“When the security guard told me to leave, and I was having this wonderful time with my kids… it makes me feel really emotional just to think about it,” she said.