Taseko fires back over defamation 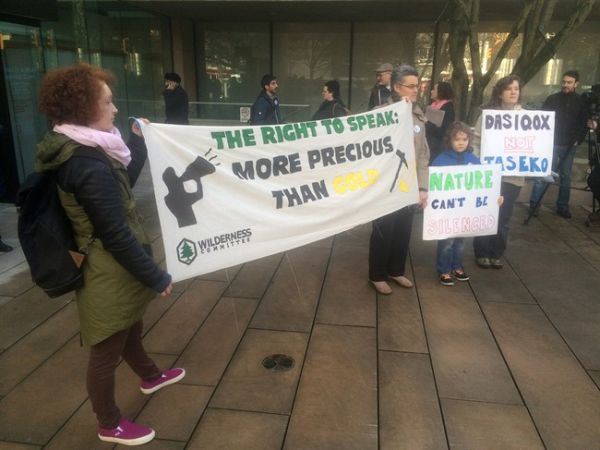 Criticism of a proposed mine by an environmental group and allegations of defamation by the project's owner have landed both parties in B.C. Supreme Court.

Taseko Mines Ltd. launched the lawsuit after the Wilderness Committee made claims during a 2012 public comment period that the New Prosperity mine could destroy Fish Lake.

The proposed gold and copper mine, 125 kilometres southwest of Williams Lake, was undergoing a federal environmental assessment when the statements were made.

Taseko lawyer Roger McConachie told court on Monday the company's civil complaint is based on five articles published by the non-profit organization, which were emailed to supporters and posted online starting in January 2012.

"You will hear submissions related to corporate entitlement to have its reputation protected by a defamation lawsuit," said McConachie, noting he expects to spend weeks presenting evidence.

The material involves libellous descriptions of the proposed project, a letter-writing tool that encouraged re-publication of the organization's claims and statements the company was pursuing a lawsuit with the purpose of silencing public debate, McConachie argued. Some of the statements appeared on Facebook.

He said the onus is on the defendant to prove the truth of its statements and that law presumes defamation allegations are false.

He said Taseko's argument is not that the Wilderness Committee's statements are unlawful because they are literal or legal innuendo, but because they create meaning that a person without special knowledge would infer.

"The claims in this case are put forward on the basis of inferential meaning that would be conveyed to the average, ordinary reader as a matter of impression," he said.

John McManus, the chief operating officer of the mine for the past year, was the first witness and said he was part of the management decision to sue the Wilderness Committee.

"We know that taking legal proceedings is a large undertaking, can be time consuming and expensive and outcome uncertain," he said.

"But the severity of what was being done by the Wilderness Committee ... We felt that this particular attack needed to be retracted and apologized for, otherwise these things become part of the public mindset and it becomes a truth and it is not a truth."

Supporters of the advocacy group stood on the downtown courthouse's steps and hoisted banners, displaying slogans such as "The right to speak: More precious than gold," and "Nature can't be silenced."

Joe Foy, the committee's national campaign director, said before the proceedings began that the group's statements outlined damage it perceives the New Prosperity mine would wreak on the environment.

"Our response is (the statements) are fair comment and as an environmental organization, that's what we do," he said.

The lawsuit is an example of a "classic SLAPP suit," he charged, an acronym for strategic lawsuit against public participation.

"We say its main goal is to not only put a chill on our organization, but to send a message to all citizens that if you comment on this project, you could very well likely receive papers in the mail and have to spend considerable time and resources defending yourself."

The federal cabinet refused to grant an environmental certificate during a previous proposal for the project in November 2010, citing adverse environmental impact and the harm it would cause Fish Lake, which is significant to local First Nations.

The company reapplied with a revised plan, but following the public comment period the cabinet again rejected the $1.5-billion gold and copper mine. The B.C. government, however, has approved the earlier version and last week granted a five-year extension.

Grand Chief Stewart Phillip, of the Union of BC Indian Chiefs, said his organization is puzzled by the targeted lawsuit because the union has made similar and sometimes more vocal public statements about the project.

"We're more known to shoot from the hip," he said. "Why is the Wilderness Committee being singled out?"

He argued it comes at a time when governments are trying to limit public voice to speed along large projects.

"This case is an opportunity to raise the importance of reintroducing SLAPP legislation in B.C.," he said.

The same call was made by activists during a series of recent demonstrations against the proposed Trans Mountain oil pipeline expansion through a Vancouver suburb when civil suits against protesters were launched.

Taseko is seeking general and punitive damages, as well as injunctive relief.