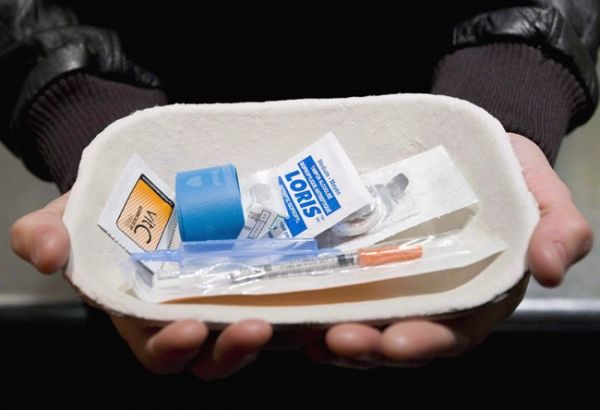 Photo: The Canadian Press. All rights reserved.
An injection kit is shown at Insite, a safe injection facility in Vancouver, on Tuesday, May 6, 2008. A bad batch of heroin has resulted in 29 overdoses in two days at Vancouver's safe injection site. THE CANADIAN PRESS/Jonathan Hayward

Toxic heroin caused 31 overdoses in two days at Vancouver's safe injection site — believed to be a record for the facility that opened 11 years ago.

Gavin Wilson, a spokesman for Vancouver Coastal Health, said 15 people overdosed at Insite on Monday and 16 overdosed on Sunday.

He said 13 people overdosed at the facility on one day several years ago.

Wilson said contaminated heroin this year has caused 10 to 12 overdoses a week at Insite, where users inject their own drugs under the watchful eyes of a nurse who can intervene when someone is in trouble.

"This year, we've been seeing about 10 to 12 overdoses a week and that has been sort of historically high when it's that much," said Wilson. "And when you're seeing 16 overdoses a day that is cause for concern, certainly."

Wilson said medical staff at Insite provide oxygen to people experiencing the initial signs of an overdose. If a user goes into respiratory arrest, a drug called naloxone is administered to reverse an overdose, he said.

The health authority is trying to inform users about the bad heroin on the streets through community workers and posters at Insite.

Vancouver police issued a warning to drug users on Sunday.

Police believed the death of one person was related to the drug, though Coroner Barb McLintock said the woman in her 20s died in a hostel in the Downtown Eastside and toxicology tests have yet to confirm the cause of death.

"We're trying to encourage drug users, if they are going to use heroin, to use with somebody else," said police spokesman Const. Brian Montague.

He said drug users should also consider shooting up at Insite, where medical professionals can deal with overdoses.

BC began a pilot project two years ago called Take Home Naloxone in an effort to reverse drug overdoses from heroin and other opioids such as fentanyl, morphine and oxycodone.

Drug users can get naloxone kits at 51 sites in BC, including clinics and hospitals, and training is available for them, their friends and family.

In March, the emergency department of Royal Inland Hospital in Kamloops became the first in Canada to provide overdose-and-response training, as well as naloxone kits, to at-risk patients.

This summer, a program at St. Paul's Hospital in Vancouver began a research study to understand the experience of youth with the Take Home Naloxone program.

The BC Centre for Disease Control said naloxone is also available as part of harm reduction programs in Alberta and Ontario as well as 17 U.S. states, the United Kingdom, Italy, Germany and Australia.