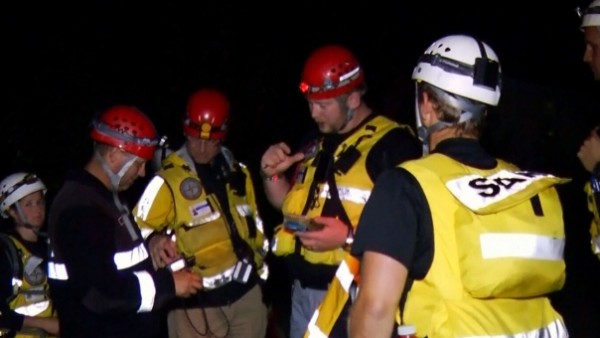 Police in Abbotsford, B.C., were cautiously optimistic Wednesday morning that a report of a missing young girl is not a case of stranger abduction.

Officers began searching for the child Tuesday night after a driver told police he saw a girl, possibly between 6 and 10 years old, lying on the side of the road near an industrial area.

The witness also said he saw a man in his 40s pick up the child and carry her into a treed area.

Officers were also told the girl didn't appear to be moving.

After an extensive search involving police, canine units and search and rescue crews yielded no results, Const. Ian MacDonald said police believe that the man might be the child's parent or guardian.

"A number of witnesses have come forward and they have indicated they saw the pair together up to half an hour before our complainant driver sees them, that they clearly appear to be in each other's company and the young girl was in good spirits and it looked as though they were parent and child, or guardian and child," MacDonald said Wednesday.

However, police remain concerned because there have been no reports from anyone about seeing the two together after the driver called police.

"Because we don't have any witnesses that can definitively say to us that they saw them after our complainant, we still are actively seeking that information and investigating," MacDonald said.

He said police tend to consider the worst-case scenario and officers are still concerned about the child's safety.

"We certainly were looking at a situation where, based on the witness report, we were potentially dealing with an injured child," he said. "And not knowing the relationship between the adult male who scoops her off the ground and carries her off, we could have been looking at something where either that adult caused injury to the child, or the adult was abducting the child."

Police in Abbotsford are searching for a young girl who was last seen lying on the side of a road and being carried off by a man into the bushes.

Cst. Ian MacDonald says a driver told police on Tuesday night that he saw a girl possibly between 6 and 10 years old lying on the side of the road near Enterprise Avenue and McCallum Road.

The driver says he saw a Caucasian man in his 40s near the girl, and the man picked the child up and carried her in the direction of a treed area.

MacDonald says officers were told the girl was wearing a pink jacket and she didn't appear to be moving.

The man who the witness say carried away the girl is described as having curly brown hair and wearing a dark jean jacket and jeans.

MacDonald says police have been searching the area since Tuesday night, and search and rescue crews have also joined in the effort.