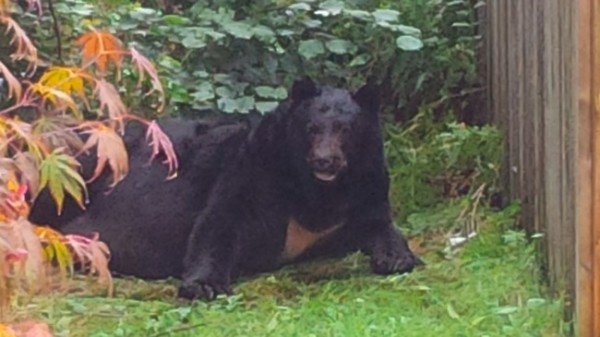 A Port Coquitlam school was locked down Thursday afternoon while conservation officers dealt with a large, lethargic black bear that was found napping on a nearby yard.

Authorities also temporarily closed off part of Prairie Avenue while armed Mounties and conservation officers try to corral the animal down to the Coquitlam River. Ecole Kwayhquitlam Middle School was only locked down as a precaution, and there was no apparent threat to students.

Conservation officer Jack Trudgian said the efforts to steer the bear out of the neighbourhood were unsuccessful.

“We tried pepper spray, we tried rubber bullets, we tried bear bangers, but I think because the bear is so tired and it’s so big it was just exhausted," Trudgian said.

Both the school and street were reopened around 4 p.m. after the bear fell asleep in some bramble bushes. Authorities said they'll continue to monitor the bear, and advised the public not to approach it.

Neighbours told CTV Vancouver the animal had been wandering from yard to yard for days. Conservation officers were called to the area on Wednesday but decided to give the animal time to leave on its own rather than tranquilize and relocate it.

The officers said they didn’t recognize the bear, which has a distinctive mark on its chest, as a problem animal.

Witnesses said the bear appeared tired, and may be either sick or potentially intoxicated from eating fermented fruit that fell off trees in the area.

"I think he ate too many apples," Michael Sonntag said. "He's sleeping off a pretty stiff hangover."

One Prairie Avenue homeowner said he nearly tripped on the bear early Thursday morning when he stepped outside and found it lying near his front door. The animal remained on his property into the afternoon.

Many area residents said they don’t want to see the bear hurt or killed.