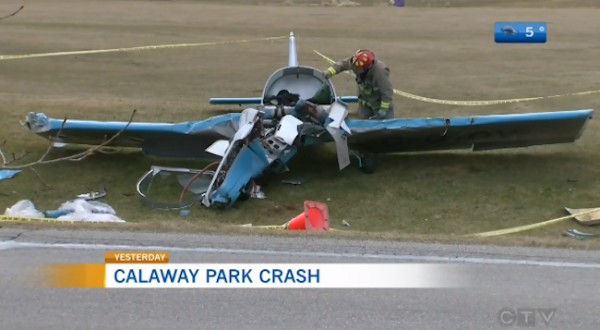 Photo: CTV
The Transportation Safety Board says they will not be investigating a plane crash involving a 39-year-old B.C. man.

A BC man is still in hospital after he crashed his plane west of Calgary near Calaway Park.

Steve Kostamo, 39, was taking off in his small, home-built, plane from the parking lot of the amusement park on Thursday afternoon when something went wrong.

The impact of the crash tore the engine from the fuselage and left him trapped inside and seriously injured.

“The patient sustained multiple traumatic injuries and there was a concern about the amount of aircraft fuel that had spilled or leaked that may have also come in contact with the patient,” said Stuart Brideaux with Calgary EMS.

Kostamo was transported from the scene in critical, life-threatening condition.

While a takeoff from a parking lot is fairly unorthodox, Kostamo did have clearance from the Park and Springbank Airport.

His family, who lives in Prince George, says that he was on his way home. They say he has extensive experience flying and building planes and flies all over the country for his work.

Kostamo is currently in Foothills Hospital undergoing surgery. He is listed in serious condition.

Meanwhile, the Transportation Safety Board, which typically looks into all crashes involving aircraft, says that they will not be investigating this crash.

They say since the pilot survived the incident and the crash involved a home-built plane, they would not be pursuing it any further.