BC Liberals to form majority gov 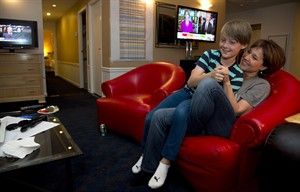 Photo: The Canadian Press. All rights reserved.
B.C. Liberal leader Christy Clark and her son Hamish Marissen-Clark,, 11, share a laugh as they watch the results come in from the British Columbia provincial election in Vancouver, B.C. Tuesday, May 14. THE CANADIAN PRESS/Jonathan Hayward

The B.C. Liberals will form a majority government, a stunning upset that has defied months of polling which had the party as many as 18 percentage points behind the NDP before the campaign started.

The Liberals re-elected incumbents, losing few of the seats they held before the election and even stealing some from the NDP they were never expected to win.