Elections BC is blaming a "mistake" by polling workers in a Vancouver-area riding after First Nations voters who attempted to use their Indian status cards as identification were asked for a second piece of ID.

The issue was first raised by the Union of British Columbia Indian Chiefs on its Facebook page, as well as by New Democrat Jenny Kwan, the incumbent candidate in the riding of Vancouver-Mount Pleasant. 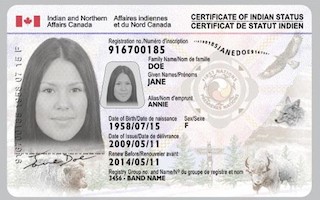 Kwan said clerks at a polling station in the Downtown Eastside were asking voters with Indian status cards for a second piece of ID, even though Elections BC lists such cards as an appropriate piece of identification. She said the problem was resolved in about 20 minutes after complaints were made to her office.

"The clerk at the office there, I guess made a mistake, and our volunteers tried to advocate for that to be resolved," said Kwan.

"When it didn't get resolved, it got reported to my elections office right away and we phoned Elections BC right away. They had someone on the ground there very quickly and swiftly resolved the issue."

Ingrid Matzigkeit, who works for Elections BC in the riding, said there was a misunderstanding because there are no addresses on status cards.

"We got a hold of the situation and we called all the polling sites to make sure all the supervisors and election officials were aware of that," she said, adding that it was "just a mistake."

"Hopefully, that will be an isolated incident."

Elections BC spokesman Don Main said he hadn't heard of the problem. Main said the issue of status cards is complicated by the fact that some First Nations don't recognize the federal government's status cards. In those cases, the cards wouldn't be government issued and couldn't be used on their own, he said.

"I saw someone get turned away with a status card, and the electoral officer tried turning me away as well," one user wrote.

Another said: "What? I thought even inhalers or medication bottles were being accepted for those with no ID but not accepting status cards? That's bogus."