Vernon-Monashee a riding to watch 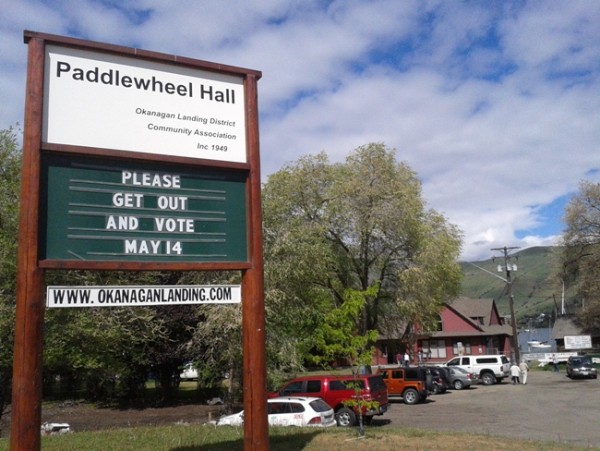 Like the old adage says, everybody has got an opinion. At no other time is that more evident than during an election.

Vernon polling stations were busy at Paddlewheel Hall and Vernon Recreation Centre on Tuesday, with a steady stream of citizens anxious to exercise their democratic right to vote.

Some said it was simply their civic duty, while others spoke more passionately.

“It’s what my father went to war for. We have that freedom and we need to exercise it,” says Clark Johnston, who is a small business owner and contractor in Vernon.

He’s voting Liberal this time, he says, even though he’s not that impressed with Eric Foster’s record while in office.

“I’m not terribly excited about any of the choices,” Johnston admitted, only half-joking that he thought 'rednecks' would do a better job of running the province.

Kathy Minchenko arrived, wagon in tow, with her daughter, Sophia and Sophia’s friend, Corbin. Minchenko says voting is more important to her since becoming a parent.

“I am thinking about my child, her education, her future. I have to vote based on what’s important for her,” says Minchenko, adding that she wants to set a good example for her children.

She didn’t want to divulge her preference in candidates, but said she thought it was going to be an interesting night.

“I think it’s going to be a tight race this year. I really have no idea who is going to win,” said Minchenko.

Others were more open about their choice.

Paddy O’Leary says he is concerned about government cutbacks in schools and other areas of public service. “It’s time for a change, just like the good guys are telling you,” said O’Leary.

One thing that voting Vernonites were clear about on Tuesday morning is that more people need to participate in electing government.

Braden Carrington was involved in federal politics in a Surrey riding several years ago.

Carrington says it’s unfortunate that the minority ends up ruling because the majority is too lazy to stand up and do something. Those in power, he says, rest comfortably knowing they don’t have to worry about the majority.

“Isn’t it sad how many people have the sheep-le attitude,” said Carrington “A small percentage of people come out to vote and then everyone else just follows.”

He went on to talk about the general public discontentment that exists with elections, at least partially because of smear campaigning.

“Here’s an idea. Let’s talk about what we’re really going to do to help people in the province instead of pushing each other down,” said Carrington.

Lisa Goble couldn’t agree more. She takes her right to vote seriously, especially since it’s only in recent history that women have been allowed to vote in BC.

CBC news has listed Vernon-Monashee as a riding to watch in today’s BC provincial election. Although traditionally a Liberal riding, CBC noted that the BC Conservative candidate, Scott Anderson, has a high profile in the community and could take the seat or split the vote on the right, giving the seat to New Democrat candidate Mark Olsen.

The BC Liberals have held Vernon-Monashee since 1996, with incumbent Eric Foster taking hold of the seat in 2009.

The final Ipsos Reid poll heading into the election placed the BC NDP eight-points ahead of the BC Liberals province-wide.

The poll results suggested, however, a tighter battle in the Southern Interior and North, with the BC Liberals at 42 per cent and the BC NDP at 39 per cent.